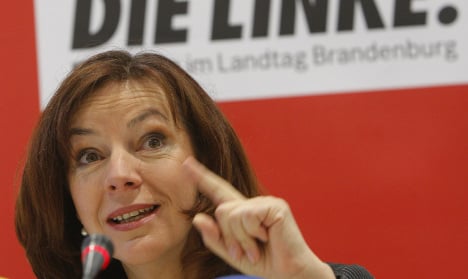 The breakthrough came just a day before the Social Democrats were due to announce which party they would choose as a coalition partner.

To date, Social Democrats Premier Matthias Platzeck had kept his options open for a coalition with either the Left of the conservative Christian Democrats.

It has been understood that Kaiser’s exemption from a ministry was a condition for many Brandenburg Social Democrats for a red-red coalition.

Kaiser said she would not seek a ministry but added that she wanted to take a place at the cabinet table as leader of the Left parliamentary group.

“For red-red, there is no substantial obstacle. I assume by this, that the SPD can now make itself clear,” said Kaiser, 49, who is also the Left’s chief negotiator in the coalition talks.

While studying in the former Soviet Union, Kaiser was an “unofficial worker” in the East German state security, the Stasi.

“I would like that this does not put a strain on the negotiations,” she said on Sunday.

Kaiser said there had been a campaign within the Social Democrats to sabotage a red-red coalition and that her past was being used as a smear, though she stressed Platzeck was not involved.

“The Premier never had a problem with my personal history,” she said.