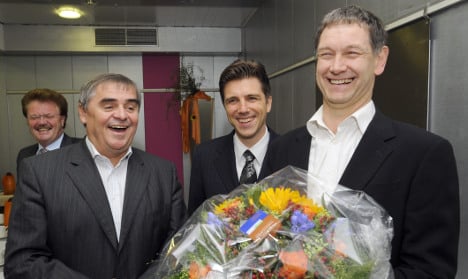 In a further blow for the left side of politics following the drubbing of the Social Democrats in the federal election two weeks ago, the leadership committee of the Greens in Saarland settled on a pragmatic coalition that would deliver a stronger majority.

The Greens leader in Saarland, Hubert Ulrich, urged the party’s members to back the Jamaica coalition at the state party conference Sunday afternoon.

It would mean the Greens were no longer pigeon-holed as purely a party of the left, he said.

Indeed, the decision stemmed from his lack of trust in the socialist Left party or its leader in Saarland, Oskar Lafontaine.

“I have no faith in this man or this party,” Ulrich said.

He said the deal had been confirmed with the other parties in writing and that the Greens expected to take the education and environment ministries in the new government.

The Greens decision not to join forces with the Social Democrats and Left party in a “red-red-green” coalition will return to power CDU Premier Peter Müller. FDP leader Christoph Hartmann would become the second most powerful player.

Under Müller’s leadership, the CDU’s share of the vote fell 13 points to just 34.5 percent at the state election on August 30, wiping out the party’s absolute majority.

The Left party was widely seen as the winner on election day, reaching 21.3 percent, though the Free Democrats also made considerable gains.

But the closely balanced vote between the broad left and right camps positioned the Greens as king-maker with its 5.9 percent.

The decision would still need the support of the 158 delegates who were to decide the party’s direction at the Greens conference.