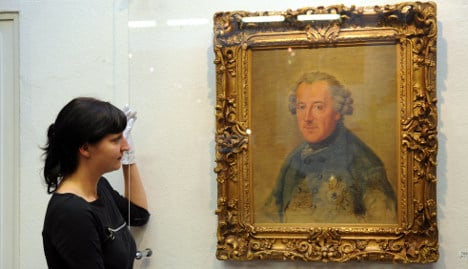 Jenny Dietze of Bolland & Marotz with the portrait. Photo: DPA

The 1763 work by painter Johann Georg Ziesenis was “extremely important in art history terms,” said Jenny Dietze, spokeswoman for the auction house Bolland & Marotz, where the painting was sold to an anonymous bidder.

Frederick II, also known as “the Great” sat for a portrait just once during his reign from 1740 to 1786. The painting is recognised for its intimate quality that shows a more private and human side to the monarch.

As such, the condition of its sale was that it must remain in Germany, as it was a valuable cultural asset, said Dietze.

The portrait was painted during a visit by Frederick II to his sister, the Duchess Philippine Charlotte of Brunswick at her summer castle, Salzdahlum.

At his sister’s request, Frederick II made an exception to his rule of not sitting for portraits – a habit he had repeatedly explained in letters to his friend, the French writer and philosopher, Voltaire.

The public finally got to see the portrait in the State Museum of Hannover in 1937.