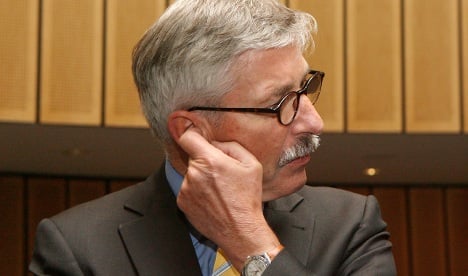 Sarrazin, Berlin’s former finance minister, said in a recent interview with the Lettre International magazine that “a great many Arabs and Turks in this city, whose numbers have grown because of the wrong policies, have no productive function other than as fruit and vegetable sellers.”

The remarks raised the strong possibility that Sarrazin might have to resign his position on the Bundesbank board after the bank’s president, Axel Weber, said the comments had caused “damage to the institution’s reputation.”

But a survey by pollster Emnid for Bild am Sonntag found that 51 percent of Germans agreed with Sarrazin while just 39 percent disagreed.

Otherwise, support for the disparaging remarks spanned the political spectrum. Sarrazin got his strongest support from conservative Christian Democratic (CDU) voters, 59 percent of whom agreed with him. This was followed by 55 percent of voters from the socialist Left party voters, 54 percent of pro-business Free Democrats supporters and 50 percent of centre-left Social Democrats (SPD) fans.

Sarrazin also won support from the 501 people surveyed for kicking off a debate on the subject of integration, with 69 percent saying such a debate was useful and just 22 percent believing he would have been better off “keeping his mouth shut.”

In the now-notorious interview, Sarrazin also said that Berliners had neither the intellect nor the talent to make Germany’s capital a great city and that the city was hampered by the fact that “40 percent of all births take place in the lower class.”