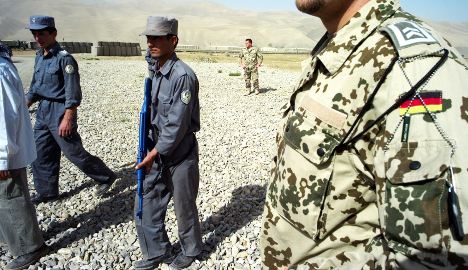 An official request for the officers would come in the next week from NATO, the magazine reported, citing sources within the transatlantic alliance.

The German officers would be needed for the “NATO Training Mission Afghanistan,” which is due to start in April.

Under the program, some 10,000 foreign instructors would train the Afghan security forces as part of a major push by NATO to ready the strife-torn country to manage its own security affairs.

This is seen as vital if countries such as Germany, the United States and Great Britain are to begin withdrawing their military forces from the country.

With the Afghanistan war becoming increasingly unpopular, most political leaders are eager to start looking towards exit strategies for their soldiers.

It is widely expected that US President Barack Obama will ask Chancellor Angela Merkel to contribute more towards Afghanistan now that the election is behind her.

A spokesman for Germany’s Interior Ministry said: “We are not aware of such a demand from NATO.”

Security experts in Berlin said Saturday it would be difficult to mobilise that many German police for such a mission.

“That exceeds all the limits,” one said.

German police, unlike soldiers, can only be deployed overseas if they give their consent.

The ministry spokesman said Germany presently had 110 police officers deployed in Afghanistan and that this was more than had ever been there previously. By mid-2010, the figure would rise to about 200 under the present plan.

They had helped train about 30,000 Afghan security personnel in the past few years, the spokesman said.