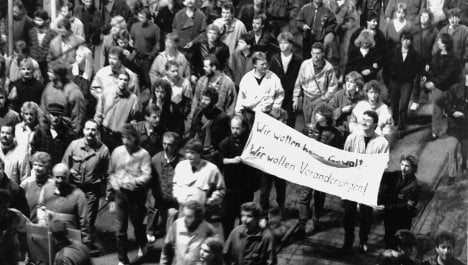 The 40th anniversary of the German Democratic Republic (GDR) was supposed to celebrate the accomplishments of socialism with slogans and torches, but most of the citizens of the failed state weren’t in the mood to celebrate. Instead they staged three days of protests in Plauen, Dresden and Leipzig.

And so the forced celebrations unexpectedly became the swan song of the tired communist system. East Germans in many cities and villages took to the streets with raised fists. In Berlin, scores of people were arrested.

Especially in Saxony (which was then still divided into the three districts of Dresden, Leipzig and Karl-Marx-Stadt) protests broke out on the streets. Three demonstrations on three successive days – on October 7 in Plauen, October 8 in Dresden and October 9 in Leipzig – played a key role in shaping the peaceful revolution in the GDR. The fall of the Berlin Wall on November 9 was simply the result of pressure from the street a month earlier.

Twenty years later, protagonists from the demonstrations in all three cities have chronicled their experiences at the time.

It was a drizzly day in the Vogtland region, near the Bavarian border. Local residents had been agitated since trains, filled with East German refugees who had swarmed the West German embassy in Prague, rolled through Plauen on their way to Hof, just 30 kilometres away in Bavaria.

Over the course of the day, more and more people gathered in the centre of the city to quickly make a crowd of 10,000. They formed a column of demonstrators and headed towards the town hall, drawing ever closer to the lines of police officers who have formed there. Church superintendent Thomas Küttler was there with his three children. He had found a slip of paper in his mailbox, written by someone who remains anonymous to this day. It called for a “Demonstration for Civil Rights on the Theatre Square.”

“It started at 3 pm. Pretty soon water cannons and police dogs were used against the demonstrators but they didn’t succeed in scattering the crowd,” remembered the 71-year-old. Eventually, the water cannons broke down. The people jeered.

“What do you think? What kind of unbelievable signal is that for demonstrators when a water cannon runs out water?” said Küttler. A helicopter circled over the crowd, inside it, as Küttler now knows, sat the police chief of the Karl-Marx Stadt district.

“At that moment, I said to myself, ‘if there’s anything to be done to calm down the situation, then I’m one of the only ones who can succeed,” the churchman said. Everyone in the city knew him from the meetings at the Protestant church to discuss what was happening in the country, even the city’s mayor.

Küttler went up to the leader of the police lines. It surprised him when the policeman stood to the side to let the church superintendent pass.

“Inside the town hall, I encountered a group of helpless leaders. They reckoned I ought to say something to the crowd.” And so Küttler climbed onto a wall in front of the building and spoke into a megaphone.

“I kept repeating over and over these words, that the most important thing was not to turn to violence.” And then he announced that within the next week, a group of 25 people could talk to the mayor.

Inside the town hall, the churchman had made it clear that it would be “a signal for peace, if the helicopter was called off.” And as if it were a scene from a movie, the helicopter turned away, the bells of the Luther Church began to toll and the crowd scattered with the shout: “We’ll be back!”

For days, Catholic priest Frank Richter in Dresden had been confronted with outraged people. At the central train station, young people who attempted to board the trains filled with Prague embassy refugees were brutally bludgeoned to the ground. Angry Dresdeners had thereafter occupied the city’s Court Church. On the morning of October 7, Richter found an anonymous letter in his mailbox. On 14 pages, someone who had been arrested during riots on the October 4 or 5 had given an account of the conditions inside the Dresden prison.

“It seemed to be similar to a concentration camp,” Richter remembered. For him it was clear by this point, his place was on the street.

On October 8, the priest wound up by accident at the head of the demonstration. Some 20,000 people had gathered. At the train station, where beatings had taken place only days before, they stood across from a line of police. Officers then marched in from the left and right. The demonstrators were closed in. Richter and a friend asked the uniformed men where they could find the police leader.

“We asked 20 officers, not one could look us in the face,” he said. At that point the two men asked themselves: Who here is actually scared?

Finally, the police detachment leader stood before them, wearing civilian clothes. He was the same age as Richter, 29. The man of the cloth said to him: “We don’t want violence. I’ll talk to the demonstrators, you bring [Dresden’s mayor] Berghofer here.” He replied: “Yes, I’ll go call.” Richter then climbed atop the fountain on Prager Straße to speak to the demonstrators.

But it was a pointless undertaking because the sound of fountain splashed was so loud that no one would understand him. Once again, in another film-worthy scene, the fountain suddenly went silent. Perhaps it always cut off at this time of day, it was 8:30 pm. But for Richter, the moment was “psychological salvation.”

He attempted to put together a group of demonstrators who would speak with Berghofer. He thought of ten people, but 50 volunteered and 23 were chosen. Richter asked the group what issues would be most important to discuss with the regime.

“Freedom to travel was the first one that was shouted out, then came freedom to vote, then freedom of the press. In total, eight demands, that could have been lifted from a catalog of civil liberties.” For the priest it was clear: These people were politically mature, but had been taken for fools by their rulers.

At that same time, three Protestant pastors were speaking with Berghofer, though the demonstrators on Prager Straße were, as yet, unaware. As a result, four churches were chosen to hold citizens’ gatherings in the coming days.

“Within one or two hours, an entire city was democratised. There were many individuals involved. But the only hero was the people,” said Frank Richter.

Following traditional prayers for peace, a growing number of people in Leipzig started taking part in Monday evening demonstrations in the weeks ahead of October 9. The day stood under a bad omen: the regime was readying an end to the threat to their power.

That it was serious about clamping down spread quickly in factories, hospitals and in the media. There were rumours that a “Chinese solution” was being sought – in reference to China’s bloody crackdown on student protesters in Beijing in June. It was supposed to be enough to scare the people from taking part in the demonstrations.

“We were frightened,” said Martin Jankowski. He was 24 years old at the time, had taken part in various Leipzig grassroots groups and was spokesman for the committee that coordinated their activities. As a songwriter, he had put the demands and visions of the opposition movement into verse and melodies. Much later, he would put the scenes of October 9 in Leipzig into a book called, “The Day that Changed Germany.”

On that Monday, the centre of the city quickly filled up, despite the tense atmosphere. “At 2 pm, SED troops occupied the St. Nicholas Church,” Jankowski said. The communist loyalists wanted to fill the opposition’s meeting places. The idea almost worked. But pastor Christian Führer was at least able to keep the galleries open for the “real” members of the peace movement.

“In the church, we heard the chants and cheers of the people outside, the police sirens,” remembered Jankowski. In four Saxon churches, people had gathered for peace prayers and the Bishop of Saxony, Johannes Hempel, spoke in each of them.

“He said, ‘stay peaceful, after the services for peace go home.’ But in Leipzig, we didn’t follow this advice,” Jankowski said.

Some 70,000 people gathered around the ring road of the city centre. They chanted, “We’re not thugs,” and “We are the people.”

“They weren’t all from Leipzig. About half of them came from all over the country,” guessed Jankowski. “Leipzig was the stage for peaceful revolution.” Over 8,000 armed men and other special units stood at the ready. “But 70,000 on the other side was simply too many.”

Six prominent Leipzigers, among them three communist functionaries and the head of the Leipzig concert hall’s chorus, Kurt Masur, had called for non-violence in a broadcast over local radio. But in the opinion of Jankowski, it didn’t make the night more peaceful because the appeal was difficult to understand outdoors.

The leaders of the security detachment in Leipzig dared not make a decision. The Politburo member responsible, Egon Krenz, was contacted in Berlin. He promised to call back, but never did.

The security forces decided not to move against the demonstrators, instead opting to protect public facilities. For Jankowski at that point it became clear: “That was the actual end of the GDR.”

Like a signal flare, the message from Leipzig soared over the entire country: The masses had the power to topple the regime peacefully.

This story was published with the kind permission of Berlin newspaper Der Tagesspiegel, where it originally appeared in German. Translation by The Local.

How did you experience the fall of the Berlin Wall and the other historic events of 1989? Der Tagesspiegel wants to know. Send your comments for the paper’s special section to: [email protected]