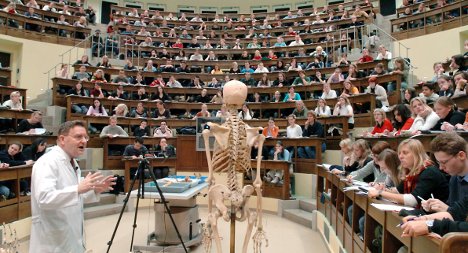 A file photo of German students in a lecture. Photo: DPA

According to the “Times Higher Education-QS World University Rankings 2009,” only four German universities are among the world’s most elite. The highest rated institution, Munich’s Technical University, rose from 78th position to 55th place this year.

University of Heidelberg remains the country’s second most elite university at 57th place, the same position as last year. Meanwhile Berlin’s Free University made it into the top 100 for the first time – jumping from 137th place to 94th.

But Germany’s overall position in the yearly rankings dropped to 10 institutions in the top 200, compared to 11 last year. Three universities dropped out of the list, while just two new campuses entered: Rheinisch-Westfälische Technische Hochschule Aachen at 182nd, and Karlsruhe University in 184th place.

“Although Germany’s overall standing in the top 200 has slipped, there have been some really impressive performances by individual German institutions,” said Phil Baty, deputy editor of Times Higher Education and the annual university ranking report.

“There is clearly potential to dramatically improve Germany’s international standing and the UK is looking over its shoulder,” he added.

The majority of the world’s top higher education institutions remain in the UK and the US, the study said, with continental Europe’s universities left far behind. Harvard University is in first place.