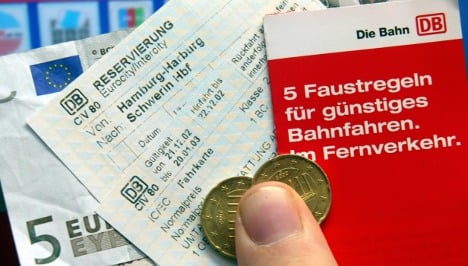 DB spokesman Ulrich Homburg said the change was to accommodate increases in personnel costs and called them “a decision with a sense of proportion.” Deutsche Bahn workers received a salary increase of 4.5 percent for 2009-2010, he said.

“In comparison to car or airplane we remain very affordable, in the end we sell about 90 percent of our long-haul trips and more than 80 percent of regional trips at a discount,” he said.

Many cost increases will barely be noticeable to infrequent Deutsche Bahn passengers, he argued. For instance, a second class Intercity-Express (ICE) ticket between Frankfurt and Mannheim will cost just €0.50 more, while a trip from Frankfurt to Berlin will go up by €2.

But seat reservations will go up a disproportionate 25 percent – from €2.00 to €2.50. Homburg said this particular increase was to discourage a growing number of passengers from making reservations on multiple trains.

The company expects to earn an extra €50 million with the price increases in the coming year. While local travel revenue remains stable, long-haul bookings are slightly down, the company said.