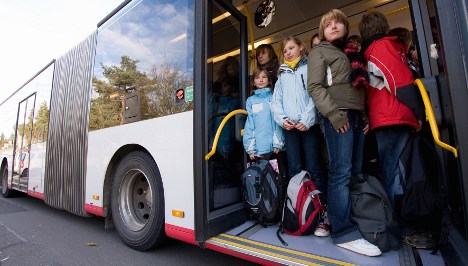 File photo of schoolchildren on a bus. Photo: DPA

The children between the ages of six and 15-years-old and their bus driver were only slightly hurt in the collision, but the driver who caused the accident was hospitalised with severe injuries. Two children were hospitalised for observation.

The 42-year-old driver failed to see the bus – which was carrying 25 children – as he turned left. The bus collided with his car, sending it into another nearby vehicle carrying a 51-year-old woman. She was not injured in the accident, police reported.

Damages to the three vehicles are estimated to be between €35,000.