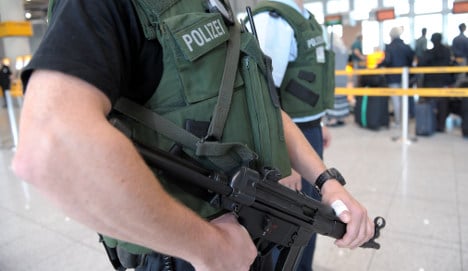 Police have stepped up security in recent weeks. Photo: DPA

Police raided a flat in Offenbach and a business in nearby Frankfurt and recovered a small amount of an explosive mixture and a homemade electronic device thought to be a detonator, federal prosecutors said in a statement. They also turned up other materials and devices durrent his arrest, which took place on Thursday.

The man, who has both German and Turkish citizenship, was named only as Adnan V. He is suspected of trying to recruit members and supporters of the Islamic militant group al-Qaida on the Internet with propaganda materials.

Currently, however, he is not thought to be linked to a number of videos ahead of last Sunday’s general election threatening Germany with attacks.

The videos prompted heightened security measures at airports and main train stations around the country, as well as sites popular with tourists like Berlin’s Brandenburg Gate or the Oktoberfest beer festival in Munich.

They warned Germany of attacks unless it withdrew its 4,200 troops from Afghanistan, where they are fighting an increasingly tough insurgency as part