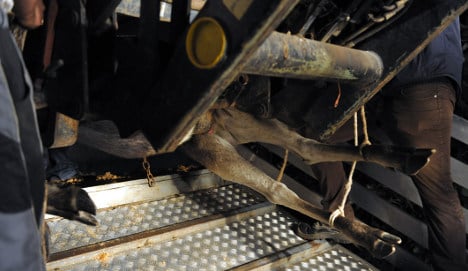 The gentle transport of Knutschi on Tuesday. Photo: DPA

The Hessian Environment Ministry announced on Friday that people collecting mushrooms in the Reinhardswald region found the elk – known as a moose in North America – which had been dubbed ‘Knutschi’ by the German media. The cause of death has not yet been determined.

“We are very sad. This wandering elk really fascinated people in Hesse,” a ministry spokesman said.

Knutschi’s untimely demise come three days after state wildlife officials tranquilised and transported the elk away from the A7 motorway, where rubbernecking drivers had been slowing traffic after catching sight of him.

The young bull, some two metres tall and weighing 400 kilos, is thought to have come to Germany from neighbouring Poland or the Czech Republic. He wandered through Saxony, Thuringia and parts of Lower Saxony before perishing in Hesse.

Germany has a poor record dealing with wild animals returning to the country after they had been hunted to extinction in the last few centuries.

In June 2006, Bavarian officials shot and killed Bruno, a brown bear they deemed “troublesome” for coming over the Alps from Italy. And many German hunters are vehemently opposed to the return of wolves, which have resettled in eastern parts of the country in recent years.