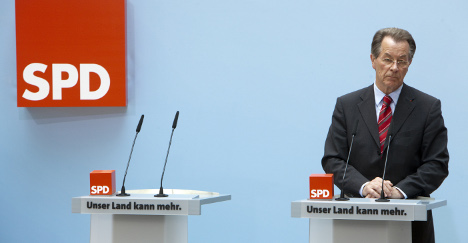 On Sunday evening at 6pm, the Social Democratic Party (SPD) was essentially made politically redundant – it was given its walking papers by voters after 11 years in government.

Finally freed of its ideological straightjacket, the party no longer has to address the here and now. The SPD is now completely free to discuss its place in Germany’s five-party political system – and is compelled to find out where it belongs within it. After losing its profile during four years of grand coalition government with Angela Merkel’s conservative Christian Democrats, the proud 150-year-old SPD can manage this despite Sunday’s crushing defeat.

This is because the disastrous result does not mean that the age of Social Democracy in German society has ended, just that the party that bears its name has to stop being its own worst enemy.

Social Democrats should not forget that they voluntarily and unnecessarily put on their political straitjacket. These constraints weren’t, as many party members assert, a necessity of government. No other party has wrestled more than the SPD with the question of how to make responsible policies for the whole of German society. There is nothing wrong with this. But putting practical issues aside, the Social Democrats often gave the impression they were not even sure if this was the right thing to do. This will not put the electorate in the mood to support a party – even when Germans, by and large, share the SPD’s main political aims.

A strategy paper, conceived and widely circulated at the party’s headquarters in Berlin, sets out ten points purporting to define this discrepancy. According to the document, the SPD projects uncertainty, its leadership lacks authenticity, it has lost credibility and become indistinguishable from other parties. It seems too slow, too indecisive, lacks transparency and sensibility, has protected big business, risked its image as a party of peace and human rights, and appears to have become fainthearted. Overall, the paper offers a dire verdict.

Even if some of the specific points are exaggerated and unfair, they do paint a good enough picture of the SPD in recent years. Central to this has been the fateful internal debate over the relationship with the socialist party The Left – which was born from a merger of East German ex-communists and disgruntled leftist Social Democrats and trade unionists. The Social Democrats have let this discussion become defined by two factors that should have been minor considerations: resentment towards ex-SPD leader and current leftist boss Oskar Lafontaine and fear of conservative propaganda. In doing so, the SPD has strategically sidelined itself.

Instead, the SPD should have entered this election campaign with the self-confidence of a party that has produced three chancellors equal to the responsibilities of the nation: Willy Brandt, Helmut Schmidt and Gerhard Schröder.

It should have declared its claim to govern Germany and left the question of coalitions until after the election. It and other questions central to the future of the Social Democratic Party – and Germany’s political landscape – must be answered now anyway.