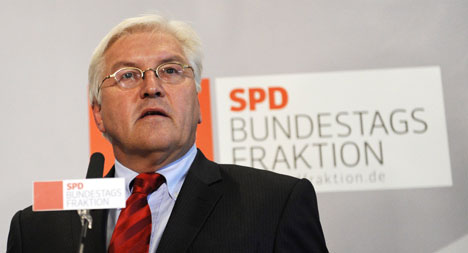 Still reeling from the Social Democratic Party’s worst election showing since the war, the centre-left party hopes to reinvigorate itself by installing new leadership as it heads into the opposition after 11 years in power.

Steinmeier, who was the SPD’s challenger for the chancellorship during Sunday’s election, will replace the retiring Peter Struck after receiving 88.7 percent of the support of the parliamentary group. He has decided, however, not to pursue the SPD’s chairman position still held by Franz Müntefering, who signalled on Monday that he would not continue as party leader.

Outgoing German Environment Minister Sigmar Gabriel is now being touted as a replacement for Müntefering that could garner enough support from the SPD’s centrist and left-wings.

“I think a two person solution is more sensible,” he told broadcaster ARD. “We also have a row of younger people who are desperately encouraged to take on leadership responsibility.”

Another spokesperson for the party’s left-wing, Björn Böhning, also encouraged bringing younger leaders into the fray, but did not name any possibilities.

“That would drive a wedge into the SPD,” he said.

Meanwhile Berlin’s SPD leader Michael Müller told broadcaster RBB he was ready to see “new faces and new names” on the party’s federal level, adding that a “generation change” must be reflected in a change of leadership.

The Social Democrats (SPD), junior partners in Merkel’s loveless grand coalition for the past four years plummeted to 23 percent of the vote in Sunday’s election.