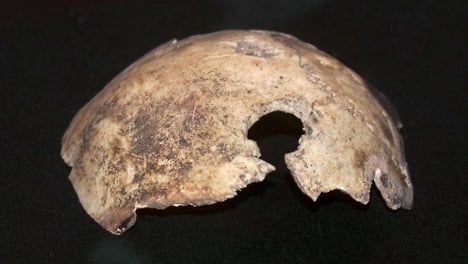 The bone, bearing a bullet hole, has been held up to support the theory that Hitler shot himself and took cyanide in his Berlin bunker as Soviet troops approached in April 1945.

Doubts about the chain of events – and even speculation that Hitler got away – have persisted for decades.

The debates made the symbolic importance of the skull piece, which went on display for the first time at Moscow’s Federal Archive in 2000, all the greater – a unique war trophy which gave the Russians enormous pride.

In addition to the skull, Soviet troops said they exhumed Hitler’s jawbone and that the bone’s identity was confirmed through his dental assistants.

Now, professors at the University of Connecticut say they have debunked the story of the skull, arguing that examinations show it belonged to a woman, probably between the age of 20 and 40.

Archeologist and bone specialist Nick Bellantoni says he immediately suspected the bone belonged to a woman because of its structure.

His partner on the project, Professor Linda Strausbaugh, director of the university’s applied genetics center, agreed to test for DNA if a good sample could be found.

So Bellantoni made the trip to Moscow, where he was allowed to obtain the DNA sample, and at the end of May the team got to work in the university’s laboratory in Storrs, Connecticut.

It took them three days, working with two forensic scientists from the office of the New York City chief medical examiner, to complete their tests.

Initially they feared the state of the skull would make it impossible to obtain results.

“All we had exposure to was photographs. What was exposed to us was the side that was charred. Fire is one of the real enemies of getting DNA evidence out,” Strausbaugh told AFP.

The skull had been stored at room temperature which had also damaged the DNA. However, the inside of the fragment was not burned and “the amounts we had were well within the range that you would expect to get DNA samples from,” she said.

“What the DNA told us is that it was female,” Strausbaugh said.

The revelation is featured in a new documentary airing on the History Channel called “Hitler’s Escape,” which revisits the idea that Hitler may have escaped from Berlin.

But Strausbaugh says her testing proves nothing about Hitler’s fate – only that the skull purported to be his belonged to someone else.

Holocaust historian Christopher Browning, a professor at the University of North Carolina at Chapel Hill, said that the results of tests on the skull would not change the consensus that Hitler died in the bunker.

Historians do not rely solely on accounts by Soviet troops, he said. They also have investigations from the period, including one by British intelligence officers who collected corroborating evidence from witnesses about the corpses of Hitler and Eva Braun.

“None of it is depending on the alleged validity of a body or skull in Russian possession,” Browning said. “When the History Channel says this throws in doubt everything we’ve known since 1945, that’s false.”

The Soviets reported digging up and moving several times remains thought to be those of Hitler, Braun or propaganda minister Joseph Goebbels and his wife and children, Brown said.

“From the point of view of archival integrity, (the skull) has no standing whatsoever,” he said.

In fact, some Russian officials and scientists have also expressed doubts about the skull fragment.

Strausbaugh said the historical value of the bone and other pieces of physical evidence collected by the Soviets was undermined by sloppy procedures.

If additional DNA samples from family members of those who died in the bunker could be obtained, the relics might tell their story.

But for now, the identity of the skull in the Moscow archives is set to remain an enigma, Strausbaugh said.