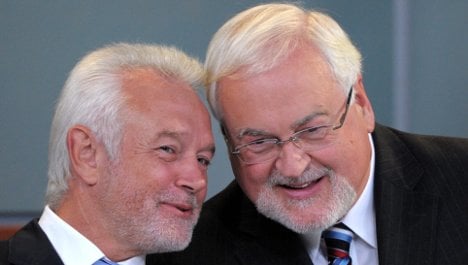 Carstensen (r) with Wolfgang Kubicki from the FDP. Photo: DPA

According to official preliminary results, the Christian Democrats (CDU) in Schleswig-Holstein under incumbent premier Harry Carstensen garnered 31.5 percent of the vote – their worst result in 60 years. But it looks as if it will be enough to have a majority with the pro-business Free Democrats (FDP), who won 14.9 percent.

The conservatives and liberals have three seats more than the other political parties in the state legislature due to the oddity of so-called “overhang mandates,” which occur when there are discrepancies between the two votes each German is allowed to cast – one for specific parliamentary candidate for their district and one for the political party of their choice.

“I’d rather have small majority than can solve problems than a very large majority that leaves problems untouched,” said Carstensen, who forced the rupture of his coalition with the centre-left Social Democrats (SPD) last summer to prompt an early election.

Support in the state plunged to 25.4 percent for the SPD, while the Greens took 12.4 percent, The Left 6.0, and the SSW Danish minority party 4.3 percent. That meant those parties actually had a larger proportion of the vote than the potential CDU-FDP alliance. The head of the Greens in the state, Monika Heinold, called for changes to the state’s election rules to ensure the balance of power in legislature better reflected the will of the voters.

The next government in the eastern state of Brandenburg, which surrounds Berlin, remained unclear on Monday. The incumbent premier Matthias Platzeck led the SPD to victory with 33.0 percent of the vote, ahead of the socialist party The Left with 27.2 percent and the CDU on 19.8 percent. The Green won 5.6 percent and the FDP 7.2 percent.

The outcome means Platzeck can continue his coalition with the conservatives or opt for a left-wing alliance with The Left. “I’m open,” he said. “We want to ensure stability.”

He said he expected to have the next government up and running by mid-November at the latest.