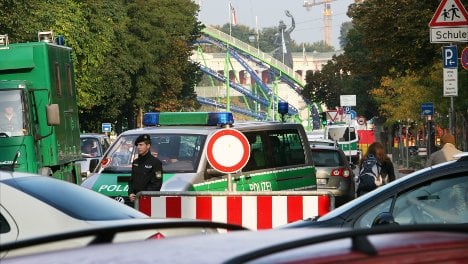 Bavarian Interior Minister Joachim Herrmann said on Monday that extra security and traffic checks had been erected around the entire festival grounds, known as the Wiesn, daily Süddeutsche Zeitung reported.

A ministry spokesperson told the paper the situation remained “highly sensitive,” and that the original team of 300 police officers manning the festival had been significantly increased.

According to the paper, increased security began on Sunday with bag checks, and increased video surveillance.

Herrmann stressed that the checks were “precautionary measures,” and there has been no concrete threat – despite there being two of four recent terrorist videos from al Qaida and the Taliban which specifically mention the Bavarian capital. The videos threatened Germans with terrorist attacks unless they elected a government on Sunday that would withdraw the nation’s troops from Afghanistan.

Meanwhile Munich police announced on Monday morning that they had arrested two suspected Islamists in connection with the videos. Both suspects allegedly had contact with al Qaida member Bekkay Harrach – who threatened Germany in one of the videos, police said.

The two men, who come from the Middle East, will be held until after the festival ends, they said.

On Thursday Oktoberfest revellers had a fright and hundreds called police when a promotional plane flew over the crowd at low altitude.

The no-fly zone order is in effect until Oktoberfest ends on October 4. At least 6 million beer-drinking revellers are expected to attend the festival.

Festival organisers reported some 100,000 more visitors to Oktoberfest than last year’s 3.3 million guests – which they attributed in part to fine autumn weather.