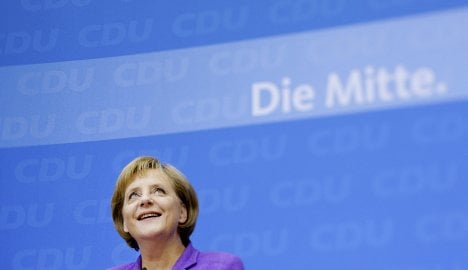 Merkel secured a new four-year mandate Sunday with election results allowing her to dump an awkward “grand coalition” with the Social Democrats (SPD) for an alliance with the pro-business Free Democrats (FDP).

“We know that we want to use this opportunity in an economically difficult time to save jobs, create new jobs and boost growth decisively,” an upbeat Merkel told reporters at the headquarters of her conservative Christian Democrats (CDU) Monday.

“I am very satisfied and happy with yesterday’s results and intend to start the new legislative term with full of momentum and energy.”

Voters rewarded the 55-year-old leader for shepherding Europe’s biggest economy through its worst downturn since World War II. The new coalition should be formed within a month.

Though Merkel savoured her election victory, daily Der Tagesspiegel said her 33.8-percent score, the conservatives’ worst since 1949, marked a “black eye” for the chancellor.

Meanwhile Die Welt hailed the election as “a success for the FDP,” referring to Merkel’s new partners in government, the pro-business Free Democrats, whose record 14.6 percent score tipped their centre-right coalition over the top.

Merkel’s identified her “top priority” as tackling unemployment, which stands at 8.3 percent at present but is forecast to surge in the months ahead, as firms lay off workers on temporary part-time working schemes.

A poll in Focus magazine showed that unemployment was also voters’ number-one issue, with 38 percent saying it was the “most important topic for the future government,” ahead of education, health and the financial crisis.

Europe’s biggest economy has been hit harder than most by the global recession, slamming demand for its all-important exports and sending the country into its steepest recession since World War II.

Output is poised to slump by five to six percent this year, the government estimates, and Germany is also sitting on a vertiginous mountain of debt.

But this time around, Forbes magazine’s most powerful woman on earth will be in a different coalition, something she believes will help her implement the reforms she says are vital for lifting the economy out of its malaise.

For the past four years, her conservative CDU/CSU bloc has been stuck in a loveless “grand coalition” with the centre-left Social Democrats (SPD).

But now Merkel’s bloc and the FDP have a comfortable 332 seats in the 622-member parliament.

“Our main objective has been achieved, namely a change of government, which for me is what really counts this evening,” Merkel, 55, said on public television on Sunday.

Turnout was at a record low of 70.8 percent against 77.7 percent four years ago.

The SPD with Frank-Walter Steinmeier, the outgoing foreign minister, as candidate for chancellor, crashed to 23 percent, its worst post-war result, and will be consigned to the opposition benches after more than a decade in government.

He told a news conference that he would actively support US President Barack Obama’s disarmament efforts and work to get Europe’s top economy back on its feet with tax cuts despite mounting public debt.

“We will of course be persistent about our electoral platform in negotiations,” he said.

“Fair taxes do not endanger state finances, to the contrary, they are the precondition for economic growth, jobs and indeed healthy state finances.”

Leaders of both parties said they wanted to spur the economy with tax relief as soon as possible. They have also said they plan to postpone plans to abandon nuclear power by 2020.

But even assuming the new partners see eye-to-eye on all issues – anything but a foregone conclusion -Merkel’s new cabinet will have its work cut out, however, even without Germany’s economic woes.

The head of European economics at Bank of America Merrill Lynch, Holger Schmieding, said the dawn of a new-look cabinet was “not a revolution.”

“There will be no dramatic changes but there will be some tax reforms over the next four years, and there will probably be some move towards deregulation modestly in the labour market and probably some changes in the health-care system,” he told AFP.

The Financial Times Deutschland agreed: “Anyone who expected or feared the chancellor will make a radical change of course with her new government is mistaken.”

In the foreign policy sphere, Germany’s mission in Afghanistan is highly unpopular and could become a major domestic headache for Merkel if an insurgency in the north where its 4,200 troops are based continues to escalate.

The presence of German soldiers in Afghanistan has also prompted a string of threats by Islamic extremists, including from al Qaida leader Osama bin Laden and German-born Muslims.