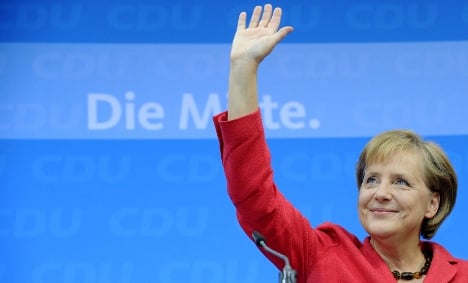 The preliminary figures released as voting closed showed the 55-year-old Merkel’s conservative Christian Union bloc (CDU/CSU) as the clear winners with about 33 percent of the vote.

Results of the German elections, based on ARD’s 9pm exit poll

That will mean that Merkel, Germany’s first female leader and the only chancellor from the ex-communist east, can serve another four-year term.

“We have achieved something fantastic,” Merkel told cheering supporters at CDU headquarters in Berlin before trying to strike a conciliatory note. “I want to be the chancellor of all Germans. There are a lot of problems to solve for our country.”

Her favoured partners, the pro-business Free Democrats (FDP), captured around 15 percent, exit polls suggested, meaning they will likely return to government for the first time since 1998.

“We are naturally pleased by this result,” said FDP leader Guido Westerwelle, who is now set to become Germany’s next foreign minister. “But this means responsibility, and we are ready to take on this responsibility.”

Under Germany’s complex electoral arithmetic, their combined score of about 48 percent will likely be enough to put them over the top.

“A black-yellow coalition looks set, we have reached our goal,” a jubiliant Volker Kauder, general secretary of Merkel’s party, told reporters, referring to the colours of the centre-right.

The Social Democrats (SPD), junior partners in Merkel’s loveless “grand coalition,” plummeted to between 22 and 23 percent – their worst score since the war – and will be banished to the opposition after 11 years in government. Frank-Walter Steinmeier, Merkel’s SPD challenger for the chancellorship and her foreign minister for the past four years, conceded defeat just after the first exit polls were released.

“This voters have decided. The results are bitter defeat for the Social Democracy,” said Steinmeier. “I’d like to thank the voters that supported us. Those votes were not in vain.”

But he said he aimed to lead the SPD’s opposition in the next parliament.

The next government “will have to prove they can handle it. And I have my doubts where they can,” he said to heavy applause from SPD supporters.

Smaller parties on the rise

The election results confirmed the growing trend towards more support for the country’s smaller parties at the expense of both two big Volksparteien, the Christian and Social Democrats.

All three smaller political outfits – the Free Democrats, The Left, and the Greens had their best parliamentary results ever.

“We have all the reason to celebrate,” said Lothar Bisky, The Left party’s leader in the European Parliament. “The Left is growing, and a Left that won double-digits has a chance to show what it can do.”

Public broadcaster ZDF reported that a record low number of Germans had voted, with turnout dropping to 71.2 percent from 77.7 percent in 2005. A told of 62.2 million people were eligible to vote on Sunday.

German election officials Sunday said they would investigate the appearance of broadly accurate exit poll results on the Twitter microblogging site before voting had ended. It is illegal in Germany to publish exit polls before the cut-off point for

voting but a number of tweets claiming to show the scores for the main parties surfaced one hour before polling stations closed.

The Twitter figures were very similar to those of the first official exit polls. A spokesman for the Federal Election Commission said an investigation would be carried out to ascertain whether actual figures obtained from pollsters were leaked. Anyone releasing figures early is liable for a fine of up to €50,000 ($73,000).

Firmer results were to trickle in over the course of the night, at the end of a campaign dominated by Germany’s deep economic troubles, as the world’s number-two exporter bore the brunt of the global crisis.

According to preliminary results from public broadcaster ARD, the Christian Democrats under incumbent premier Harry Carstensen in Schleswig-Holstein garnered 31.5 percent of the vote and the FDP won 15.1 percent. The SPD slid to 25.6 percent, the Greens took 11.8 percent, The Left 6.3, and the Danish minority party 4.3 percent.

In Brandenburg, the state’s popular premier Matthias Platzeck carried the SPD to 32.8 percent of the vote. He can now decide whether to continue to government with the Christian Democrats, who won 19.8 percent, or the The Left, which came second with 27.2 percent. The Greens scored 5.3 percent and the FDP 7.4 percent of the state vote.