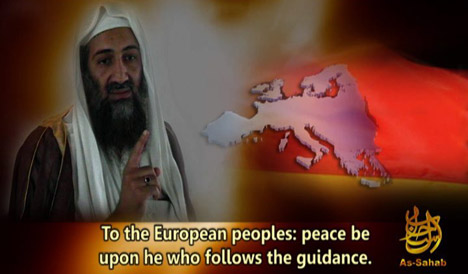 The new internet video threats are believed to come from the Taliban, an Interior Ministry spokesman said, and demand that Germany withdraw its troops from the war-torn country.

In the new video, a man calling himself “Ajjub” and speaking in German said: “Because of your commitment here against Islam, attacking Germany has become an attractive idea for us, the mujahideen,” according to the spokesman. The militant said it was only a matter of time “before jihad destroys German walls.”

A German investigator quoted by Der Spiegel magazine’s internet site described the threat as “the most concrete” against the country because of the places and people singled out. The magazine said it was the first known German-language video from the

But the ministry spokesman insisted the recording “does not change our evaluation of the risk of an attack.”

Germans have already been shaken by bin Laden’s message and other videos. Abu Talha al-Almani’s video amounted to an “abstract threat” against the country, the German government said. The recording, posted Thursday, came days after the Al-Qaida operative threatened attacks in Germany over its military mission in Afghanistan.

Germany votes Sunday in an election to choose the coalition that must decide how long to keep the country’s more than 4,000 troops deployed as part of NATO’s mission in Afghanistan.