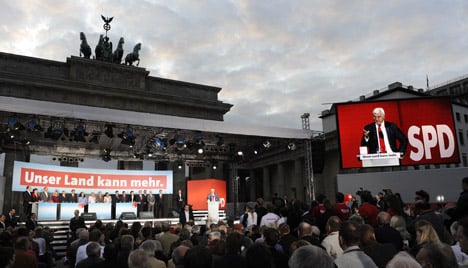 “The Union is getting more nervous by the day,” Steinmeier told a crowd estimated at 10,000 people at Berlin’s Brandenburg Gate, referring to Merkel’s conservatives. “The big lead they had has melted like ice in the sunshine. We will keep fighting for every vote until the last second on Sunday at 6 pm” when the polling stations close.

Merkel, seen as a shoo-in to be re-elected as chancellor, currently governs in an unwieldy “grand coalition” between her conservative Christian Democrats (CDU) and Steinmeier’s centre-left Social Democrats (SPD).

She aims to dump the SPD and link up with the smaller, pro-business Free Democrats, who advocate slashing taxes and extending a deadline to close all of Germany’s 17 nuclear power plants.

Her favoured centre-right coalition had a strong lead in the polls until early this month and now will have to scrape to form a ruling majority, according to the latest surveys. If it comes up short, the most likely option is another grand coalition. Steinmeier warned that voters who saw Merkel as a moderate would be in for a rude awakening with a CDU-FDP government.

“You will see clear-cutting of the social welfare system,” he said, forecasting weaker worker protection laws, the elimination of hard-fought sector-wide wage agreements and the expansion of temporary jobs at the expense of permanent ones. “That will mean fewer qualified workers and more joblessness.”

Steinmeier predicted a return to the at times violent mass demonstrations against nuclear power if Germany went back on its pledge to close its reactors by 2020, and an end to the “principle of solidarity” if the FDP were able to claim the Health Ministry.

He said the SPD had kept Merkel on the straight and narrow during Germany’s worst postwar economic crisis by fighting to protect jobs with policies such as a “cash-for-clunkers” scheme to prop up the auto industry.

Voters said the often colourless Steinmeier, a veteran bureaucrat who has never run for political office, had in the final weeks of the campaign developed the killer instincts needed in a candidate.

“I’ve never seen him better,” said Monika Buttgereit, a 59-year-old teacher. “He was relaxed but feisty and he got across the main point – we have to stop Black-Yellow,” she said, referring to the party colours of the centre-right.

Others said they were still undecided.

“I wanted to hear more about what he plans to do about Afghanistan because the mission there is going nowhere fast,” said lawyer Sebastian Hoehmann, 39, adding that he would probably vote for the hard-line socialist party The Left or the Greens.