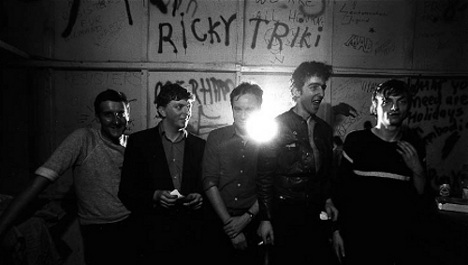 Mark E. Smith and The Fall, backstage in May 1984. Photo: Peter Gruchot

The news comes only weeks after the Toten Hosen, a seminal German punk band from Düsseldorf, played a charity concert to raise support for expensive noise insulation at the venue. SO36 is considered Germany’s answer to New York’s now defunct CBGB and has hosted some of the biggest names from the punk scene since opening its doors in 1978.

But the building managers of the premises rented by the club cancelled the lease, which was due to run until March 31, 2010, after escalating disagreements and outstanding rent payments.

Click here for a photo gallery of legendary SO36 shows.

Franz Schulz from the Green party, district mayor of Friedrichshain-Kreuzberg, met with both parties on Thursday evening in a final attempt to broker a settlement between the SO36 and its landlords.

“The talk was very constructive, we hope we can still reach an agreement,” Nanette Fleig from the club said.

However, Simone Stober, who took over ownership of the premises in January 2008 and was once a regular attendee of the club, told the Berliner Zeitung this week: “Unless the city government is prepared to assume rental guarantee for SO36, we will enforce the cancellation.”

Apparently the dispute is no longer one about noise, nor even rent payments, but rather one of principle. Stober told the paper of her difficult relationship with the club, which has disintegrated to the extent that at one point that she was being pursued by journalists and receiving mysterious phone calls.

The club – and more generally the German punk scene – is deeply involved with the Kreuzberg district.

SO36’s name refers to the former postal code for the area, Südost 36, which was the poorer half of the district. It was traditionally known for its mix of diverse cultures and alternative lifestyle.

The first German punk concerts took place in the former beer hall of Oranienstraße, the street at the very heart of the district, with Iggy Pop, David Bowie and the Einstürzende Neubauten all taking part.

But now it seems that the mood is changing.

As The Local reported in June, the club had been struggling to raise money for a sound-proofing wall due to increasing complaints from nearby residents. These days, Stober said, inhabitants want a little more “harmony” in a neighbourhood where young families with children should be able to feel at home.