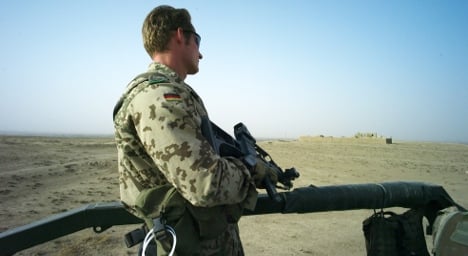 The inquiry by defence committee member and Free Democrat Elke Hoff found that a total of 245 cases were documented in 2008, of which 226 concerned soldiers who had served in Afghanistan. But in the first half of 2009, already 163 cases have been reported.

Meanwhile the Munich-based Süddeutsche Zeitung cited the same study, based on defence ministry statistics, to reveal that only half of the 40 psychiatric positions in the Bundeswehr medical service are filled.

In Afghanistan, where German soldiers face an increasing number of insurgent attacks, there is just one psychiatrist to serve 4,500 troops, the paper said. The Rhein Zeitung reported these soldiers have two therapists at their disposal.

Colonel Mario Horst Lanczik, a doctor in the Bundeswehr reserves, told the paper he had observed major deficits in the care of PTSD cases during a tour in Afghanistan over the summer.

“Medical examinations for the prevention, treatment and development of psychiatric illnesses after combat operations are not adequately available,” Lanczik said.

The doctor said that some 30 percent of American and Israeli soldiers suffer from PTSD after combat, adding that comparable rates can also be expected in the Bundeswehr.

Many soldiers he treated reported a “stigmatisation” and “lack of understanding for their jobs as soldiers,” he said.

Former Bundeswehr soldier Frank Eggen, who began the Angriff auf die Seele, or “Attack on the Soul” initiative to help soldiers suffering from PTSD 18 months ago, told The Local on Thursday that he is most often contacted by concerned relatives and friends.

Eggen works closely with Lieutenant Colonel Peter Zimmermann, head of psychiatry and psychotherapy at the Bundeswehr hospital in Berlin, to quickly find help for struggling soldiers. He founded the organisation after watching his commrades suffer from psychological strain after service abroad.

“This study confirms my feeling that the problem is growing,” he said. “In my experience there is too little help for deployed soldiers. If they are in a real emergency, they get immediate care. But otherwise there can be a long waiting period of six to eight weeks before they can see a therapist – though this can often be the case for civilians too.”

Many of the soldiers Eggen works with don’t seek help for many months or years after their service, which means the Bundeswehr needs to improve long-term healthcare planning for its soldiers, he said.

Meanwhile MP Hoff, who ordered the study, told Süddeutsche Zeitung that the German government had failed to improve psychological care for its soldiers and demanded it fill the vacant positions as soon as possible.

“First the government failed to recognise the relevance of PTSD and now it’s refusing to implement the task parliament gave it across all party lines,” she said.