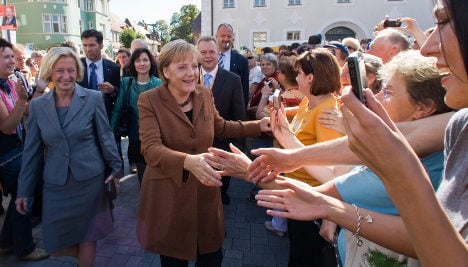 Analysts put the political strength of the first female to lead Europe’s most populous nation down to her ability to surmount sexual stereotypes rather than any bonus as a woman.

She still stresses her roots in former communist East Germany far more than her sex, in speeches ahead of the September 27 vote.

But the childless Merkel, occasionally dubbed “Mother of the nation” by the German press, has begun projecting a warmer image by poking fun at her own attempts to put forward a bit of feminine charm.

“I still learn something new everyday,” she says in a campaign advert, gazing out from her ultra-modern chancellery. “Like how important a hairstyle can be,” she jokes, in a sly reference to her notorious bowl cut when she first hit the political scene, and her blonder, softer look today.

The woman former chancellor Helmut Kohl called his “girl” has won the Forbes crown for the fourth year running but she rarely highlights traditional “women’s issues.”

In an interview with feminist magazine Emma last month, she called the pay gap between the sexes a “real problem” but ruled out state intervention.

“I advise any woman who earns less than her male colleague for the same work to go to her boss self-confidently and say something has to change,” she said. “We politicians will keep up the pressure,” she pledged.

Leonore Volkening, a 72-year-old retired nurse from Hamburg, said she backed the SPD but felt proud watching a woman represent Germany on the world stage.

“If you look at her family policies, she managed to co-opt so many SPD ideas and make them her own. It may not be fair to the SPD but I say, hats off,” she said.

Thanks to a policy drawn up by her handpicked family minister, mother-of-seven Ursula von der Leyen, working parents can now enjoy a year off to raise their children at two-thirds their previous pay, with an extra two months thrown in if Dad agrees to take some of the time.

When Merkel ran for chancellor in 2005, she “did not have a bonus with women at the outset,” noted political scientist Brigitte Geissel at the Technical University in Darmstadt, western Germany.

In fact her opponent, then Social Democratic chancellor Gerhard Schröder was more popular among women.

But Geissel said Merkel had in four years in office gradually won over many female voters who see her as a positive role model “and get a kick out of seeing a woman representing Germany, for example, at the G8 summit.”

Petra Lehmann, a 43-year-old midwife in Berlin, said Merkel had quickly silenced comparisons with former British Prime Minister Margaret Thatcher after becoming chancellor but could use a bit of the Iron Lady’s backbone.

“She backpedals all the time and tries to be all things to all people,” Lehmann complained. “Thatcher imposed her will and that was it.”

In a nod to the key female vote, Steinmeier has packed his potential cabinet with women, even in traditionally male bastions such as defence.

Geissel said few Germans seemed to take notice but noted that a heavily male team would have been a clear negative for the candidate.

The Women’s Union of Merkel’s CDU party touts her family and education policies. Its leader, Maria Böhmer, noted that at the 2005 elections, there were still voters asking whether a woman could lead Germany.

Now, she said, Germans are looking at Steinmeier as Merkel’s challenger and wondering “Is he up to the job?”