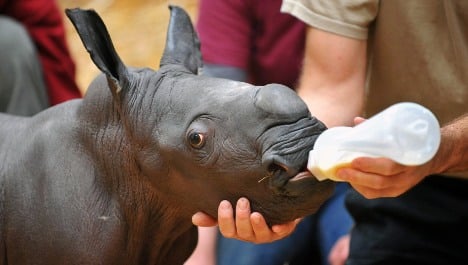 The 18-year-old mother “Emmi,” who has already killed two of her previous calves, began pushing the yet-unnamed newborn into a corner on Sunday. Just four minutes into her young life, zoo staff intervened and the calf was separated from her mother relatively unharmed.

“Now she gets a feeding of a special milk formula many times a day,” zoo biologist Dirk Wewers said.

Zoo director Adler has already warned that she will not become another Knut, the famous polar bear raised by his handler, the late Thomas Dörflein, at the Berlin Zoo.

“We will give her as much contact to the rhino world as possible and only as much human contact as is necessary,” he said.

For now, the 58-kilogramme calf is living under two heat-lamps and is constantly petted by her handlers.

“Touch is extremely important for these animals,” said Wewers.

Only an average of three rhinos are born at European zoos each year.