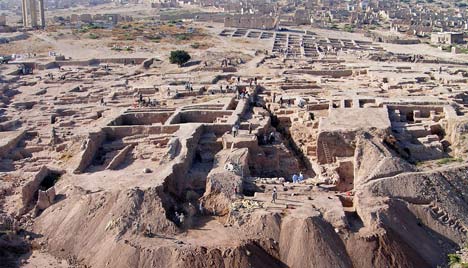 A file photo of the dig in Syria. Photo: DPA

The crypt 3,500-year-old tomb contains a significant number of artefacts, as well as human bones.

The team, led by Professor Peter Pfälzner from the University of Tübingen, and Dr. Michel al-Maqdissi, Director of Excavations at the Directorate General of Antiquities in Damascus, had already discovered a royal burial chamber undisturbed by grave robbers under the palace back in 2002.

This latest crypt, discovered during excavation of the northwestern wing of the palace consists of a front chamber and a grave chamber and is 4.90 by 6.30 metres large, according to a statement from the university.

Click here for a photo gallery of the items found at Qatna.

Thirty skulls within suggest that a corresponding number of people were buried there, and bones stacked in groups among splinters of wood may indicate a secondary burial, the statement said.

Ceramic and well-preserved stone vessels of granite and alabaster, along with gold jewellery and other artefacts were also within the crypt. The team also found a small sculpture of a monkey holding a vessel used for cosmetics and an ivory human statuette.

While the university has announced further research into identifying the bones, a lack of inscriptions will make finding out who was buried there a complicated task. The statement said it is possible they were members of the royal family or of the royal household.

Qatna was a prominent kingdom in Bronze Age Syria. In its heyday, between 1800 and 1600 BC, it was one of the most powerful states in the region. The recent excavations are expected to provide a wealth of new information about the kingship of Qatna, its artistic excellence and its relationships with other powers during its time.

Finds from the crypt discovered in 2002 will be displayed for the first time in Europe in the Baden-Württemberg State Museum in Stuttgart from October 17 until March 14. The museum also has special presentations and art history workshops planned for children.