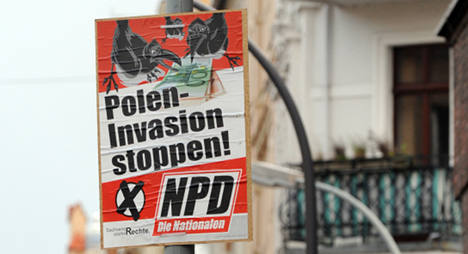 The court in the state of Mecklenburg-Western Pomerania said Saturday the signs were illegal and an incitement to racial hatred.

In early September, the NPD hung more than 50 of the signs up in the Ueker-Randow district of the state which borders Poland and counts more than 1,000 Polish citizens as residents. Local authorities removed the placards, prompting a lawsuit by the NPD.

In the first phase, the NPD succeeded in getting the support of a lower court to declare the district’s actions improper. Saturday’s decision by a higher court overturns the lower court’s action.

A court spokeswoman told the DPA news service that the text and picture elements of the NPD placards were an affront to the human dignity of others and posed a danger for public security and order.

The NPD’s only recourse now is to appeal the case to the Federal Constitutional Court in Karlsruhe on the grounds that the party’s constitutional rights have been violated.

The party, which is under observation by German domestic intelligence agencies for its anti-foreigner message, has been successful gaining votes in the economically weak region.

In 2006 state elections, the NPD pulled in 7.3 percent of the vote, enough to gain representation in the state parliament. The party also holds 4 out of 47 seats on the district council.