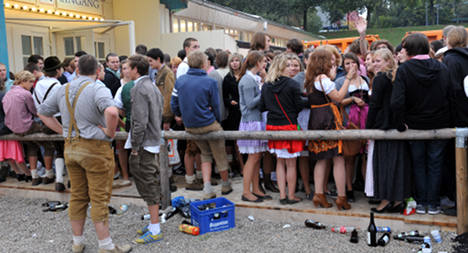 An hour before Munich mayor Christian Ude opened the bash by tapping the first keg with the traditional cry of “O’zapft is,” several beer tents were closed due to massive overcrowding.

Bavarian government head Horst Seehofer of the conservative Christian Social Union was also present, and other top politicians were expected to put in an appearance in a bid to drum up votes ahead of Sunday’s polls.

Crowds of Munich natives in traditional dirndls and lederhosen, along with hordes of tourists began lining up early Saturday morning in the hopes of getting dibs on preciously scarce table space. Many began the party early, bringing along cases of beer and bottles of sparkling wine to pass the time spent in line.

After a terror warning directed at Germany by Al-Qaeda Friday evening, Bavarian officials confirmed that police in Munich were on a high state of alert to prevent attacks against the Oktoberfest.

In some tents, festival-goers were asked to open their bags and submit to searches by police and security guards.

This year, Oktoberfest visitors have also been asked to wash their hands frequently and take precautions to prevent the spread of the swine flu, which has already infected thousands of Germans.

Inflation continues to hit the Oktoberfest, with the price of a traditional litre mug of beer rising by up by 30 cents to between €8.10 and €8.60 and the press warned not to film drunken bare-chested revelers.

The warning by the organisers has angered the Bavarian journalists’ union, which has alleged “pre-censorship.”

“The Oktoberfest is not just an idyllic world. It’s in the public interest to record this great event,” union chief Wolfgang Stöckel said Friday.

Over six million people are expected to pass through the suds-soaked beer tents between Saturday and October 4, when the Oktoberfest comes to an end. Organisers estimate that over 6.6 million litres of beer will be drunk and 104 oxen will be grilled.

All told, the annual festival brings in over €830 million to the southern German city.