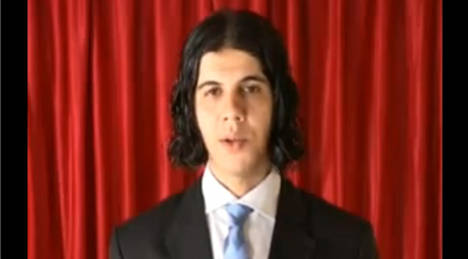 Germany was also told to withdraw its 4,200 troops from Afghanistan or face being attacked at home, the US-based groups said.

In video footage a man identified as Abu Talha the German, and speaking in German, says that if Chancellor Angela Merkel is re-elected, “bitter times await the Germans,” according to IntelCenter and the SITE Intelligence Group.

He asks: “Mrs Merkel, what is the logical outcome reaped by the British and Spanish conservatives by their support for the Iraq war?” in an apparent reference to attacks in Madrid and London in 2004 and 2005.

He appears to suggest that if German voters do not heed his warnings, Al-Qaida will act within a fortnight.

Germany’s interior ministry said on Friday there was an increased risk of attacks on German soil ahead of the elections, and said security at airports and train stations had been boosted.

Addressing German Muslims Abu Talha says: “Al-Qaeda asks you to stay away from all that is not necessary in the two weeks that follow the elections, if the German people does not decide to withdraw its soldiers from Afghanistan. Keep your children near you in this period.”

Abu Talha, whose real name is said to be Bekkay Harrach, stands in front of a red backdrop, wearing a jacket and tie.

He is said by the German authorities to be a native of Morocco, and in his early 30s, who has lived intermittently in Bonn and is now thought to be in the Afghanistan-Pakistan border area.

In the footage he asks Muslim youths in Germany to let Al-Qaida act first if the jihad were to begin in Germany, and says they will be told if action is required afterwards.

He also said the city of Kiel “will remain a peaceful city, no matter how long the conflict.”

Abu Talha says that if Germany withdraws from Afghanistan, Al-Qaida will no longer target it.

“If the Germans are inclined now towards peace, then the mujahideen will be inclined towards peace, as well. With the departure of the last German soldier from Afghanistan, the last mujahid in Germany will be withdrawn.

“It is time for Germany to know that Afghanistan is not the seventeenth province of Germany and that it is not the ‘beer tent’ where to hold the ‘Oktoberfest’ throughout the year,” he added.

The authenticity of the nearly 26-minute video cannot be independently verified.

In that video, he also threatened reprisals if Germany did not withdraw from Afghanistan.

He said Germans were “gullible and naive” if they thought they “were going to get off without injury when they are the third (largest) occupying force in Afghanistan” after the Americans and the British.

He later dictated an audio message that was released on February 26 and was entitled “Islam and the Financial Crisis.”

Conservative German Chancellor Angela Merkel appears to be on track for re-election, although an opinion poll published on Friday showed her lead to be shrinking.