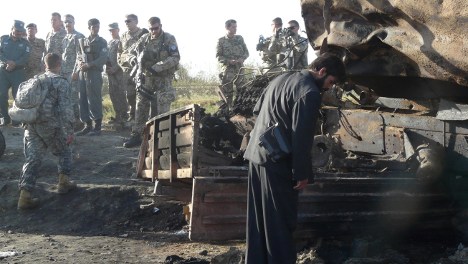 The NATO sources, who spoke on condition of anonymity according to the newspaper, said Colonel Georg Klein told alliance partners that German soldiers were in direct contact with the enemy when he called for the bombing which killed several civilians in Kunduz province on September 4.

The officials said no units from the NATO-led International Security Assistance Force (ISAF) were in the vicinity of two coalition fuel trucks that had been captured by Taliban militants, the target of the strike, it said.

When asked by ISAF command via radio what kind of contact the troops had with enemy forces, Klein responded “visual contact,” the sources told the newspaper.

To order an air strike without confirmation from ISAF headquarters, officers must affirm that their soldiers are in direct contact with the enemy, according to NATO rules cited in the report.

NATO and the German defence ministry declined to comment on any possible violation of procedure.

An Afghan government report this week described the September 4 strike as a mistake and said it had killed 99 people including 30 civilians.

NATO has not completed its probe of the bombing but has acknowledged that civilians were among the dead.

In response to allies’ criticism of the strike, Germany has asked other governments not to comment until the investigation is complete.