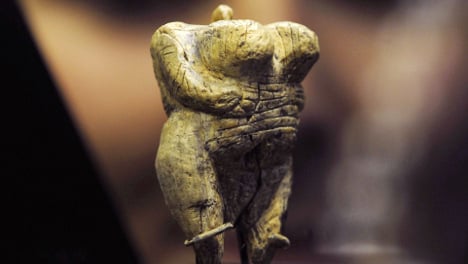 Among the must-see pieces is undoubtedly the 35,000 to 40,000-year-old “Venus of Hohle Fels” feminine figurine, found in 2008 by Tübingen archaeologists. Believed to be the oldest of its kind, its recent discovery was a worldwide sensation.

The 40,000-year-old skeleton from Mettmann near Düsseldorf, which gave its name to the Neanderthals, is also not to be missed at the Eiszeit Kunst und Kultur, or “Ice Age Art and Culture” exhibition.

Visitors can also catch a glimpse of an ivory mammoth from the Vogelherdhöhle, and a 40,000-year-old bone flute thought to be the oldest musical instrument in the world.

More than 1,000 pieces are on display, from 77 different museums, collections and institutes in 14 different countries.

The state of Baden-Württemberg valued the costs of the exhibition on Palaeolithic finds in the region and greater Europe at €2.7 million.

Baden-Württemberg has contributed €1.7 million to the costs of the exhibition at the state archaeology museum, while the rest will be covered by entrance fees and sponsors. Organisers are hoping to welcome some 100,000 visitors to the show, which runs until January 10 2010.

For families, the museum has a special children’s programme scheduled with puppet shows and archaeology workshops.