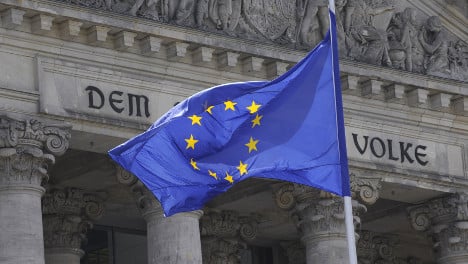 The EU flag flies in front of the Reichstag. Photo: DPA

After the Bundesrat’s unanimous approval, the country’s President Horst Köhler will sign off on the legislation, the final step required for it to come into force.

Germany’s acceptance of the treaty means that all eyes are now on Ireland, which holds a second referendum on the landmark reforms on October 2, having thrown the EU into chaos last year by rejecting the treaty in a popular vote.

Latest polls suggest the Irish will this time give their consent to the treaty after receiving reassurances on issues of key importance to Dublin, such as the country’s abortion laws and its cherished military neutrality.

All 27 EU member states must ratify the treaty before it can come into force and the leaders of Poland and the Czech Republic have said they will not sign it until after the Irish referendum.

In Germany, the top court ruled in June that the treaty – aimed at streamlining decision-making in the bloc – must be put on ice until legislation safeguarding national parliamentary power was passed.

This sparked months of political debate on European affairs before the country’s main parties drafted a revised law to satisfy the court’s concerns and to ensure the EU “does not exceed the powers given to it.”

The new law states that the lower house of parliament, the Bundestag, must be consulted if changes are made, for example, to Germany’s veto rights and must be informed sooner and more comprehensively about proposed EU legislation.

The Lisbon Treaty is designed to replace the current Nice Treaty, drawn up when the bloc was around half its current size.

If it comes into force, the European Union would do away with the present system of rotating presidency in favour of selecting a leader for a limited term.

A powerful foreign policy leader would also be appointed.