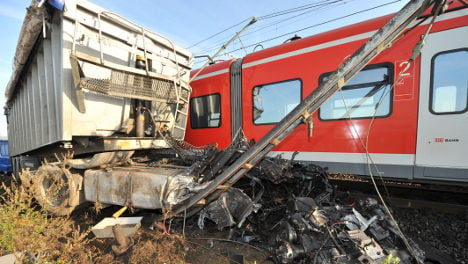 The driver of the truck carrying turnips died in the accident in the area outside of Hannover.

The S-Bahn had been carrying 67 passengers between Hannover and Springe when the collision occurred at the railroad crossing, which had just a light and no traffic gate.

According to local paper Hannoversche Zeitung, the crossing at Vörie where the accident occurred at 7:47 am has good visibility and police officers do not know why the 67-year-old truck driver attempted to cross the intersection in front of an oncoming train.

The 33-year-old S-Bahn driver used his emergency brakes, but was unable to stop in time and hit the truck cab, dragging the vehicle some 30 metres, the paper said.

Some 45 emergency personnel from the surrounding region were on hand to treat passengers and clean up the accident scene. Aside from the truck driver, there were no serious injuries.

The tracks in the area were closed in both directions and S-Bahn officials are investigating whether the light at the crossing was functioning at the time of the accident, the paper said.