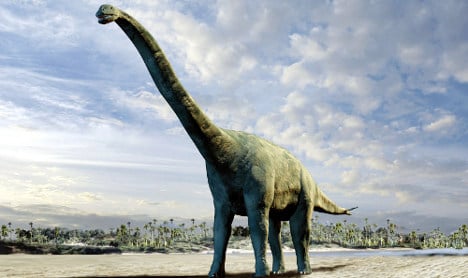 “At the time we thought we had found another dinosaur of the Jobaria variety,” recalled expedition leader Professor Ulrich Joger of the State Natural History Museum in Braunschweig.

It was more focused study of the knees that revealed the real sensation they had unearthed – a previously unknown type of dinosaur from the Sauropod family. These dinosaurs typically have four thick legs, a large head and a long neck. But this creature was given the name spinophosaurus nigeris on Wednesday because of the spines on its tail.

“Such weapons are very unusual for Sauropods,” said Joger.

At an age of around 170 million years, the Spinophosaurus is particularly old, even for a dinosaur.

Click here for a photo gallery of the new dino.

“The discovery is of particular importance as this dinosaur sits at the top of the Sauropod genealogical tree,” explained Joger.

The discovery of the dinosaur in Africa is of particular significance, as most similar discoveries recently have been made in North America, along with some in China and Mongolia.

“With this find, Africa moves to the centre of dinosaur research. But Africa is a politically unstable continent, often making digs there particularly difficult,” added Joger.

“There was a far reaching river complex in the area, so the animals we found there were surrounded by an overwhelming presence of life.”

His project was undertaken between 2005 and 2008, mostly in the Republic of Niger. Local nomadic people from the Tuareg group showed his group where the knee bones could be found. The dig site initially exposed two skeletons, to be taken back to Germany for preparation, before the site was closed.

Unluckily for Joger’s team, however, it was a Spanish group that first got hold of one of the skeletons of this newly discovered long-necked dinosaur variety, after catching wind of the story of the knee bones.

Since then, researchers from the two countries have been working together on the specimen in Bonn and Braunschweig.

As consolation for the loss of the knee bones, however, the German team uncovered another significant skeleton just a kilometre away.

“We found traces of a raptor,” revealed Joger.

It had been thought that such dinosaurs could only be found in China and North America. Joger now believes there may have been a land connection between the areas, though further research will be necessary to confirm this theory.

As thanks for help in their discovery, the Braunschweig group have worked with an aid organisation to establish a school for Taureg children, including sending 20,000 school books. When the skeleton goes on show on October 21, guests from Niger will also be invited to the “Projekt Dino” exhibition in Braunschweig.