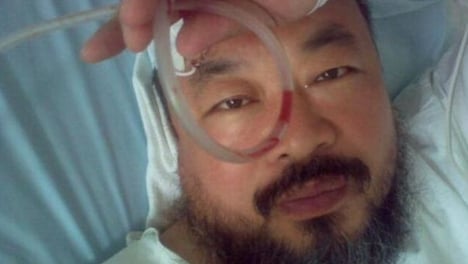 According Munich’s Haus der Kunst (House of German Art), where he has an exhibition coming up next month, the emergency operation was to repair damage to his brain sustained on August 12 during a police attempt to discourage his testimony in a Chengdu court.

“He is doing well and will remain in the hospital for the next few days, we’re not sure when he’s leaving yet,” Munich Municipal Hospital spokesperson Philip Kresserer told The Local on Wednesday.

The well-known artist has compiled the names of more than 5,000 school children killed in the Sichuan earthquake of May 2008 in his own investigation of alleged building corruption. He had planned to testify in favour of civil rights lawyer Tan Zuoren, who was on trial for beginning a similar investigation.

But at 3 am on the day he was to go to the court, he says some 20 armed officers broke into his hotel room and arrested him. While in custody, he was beaten.

A resulting head injury caused frequent headaches, and on Monday he sought the care of a doctor in Munich, Haus der Kunst press spokeswoman Sonia Szunke told The Local.

“They said he needed to be admitted to the hospital immediately,” she said.

Doctors operated on a haematoma on the right side of his skull.

“I feel much better,” the outspoken artist told news agency DPA on Wednesday morning. “I almost died, but everything is OK now.”

Ai said he had not received proper medical attention in China before coming to Germany for his exhibition, and German doctors said he had been close to falling into a coma.

“At least here I can get good medical care,” he told daily Süddeutsche Zeitung. “Thousands of fellow countrymen who are mistreated every year by police can’t get that.”

Ai is known in Germany for his work at Kassel’s Documenta 12 contemporary art festival in 2007. He also collaborated with architects Herzog & Demeuron to build the iconic Bird’s Nest stadium at the 2008 Beijing Olympics.

He is widely considered one of China’s most influential contemporary artists.