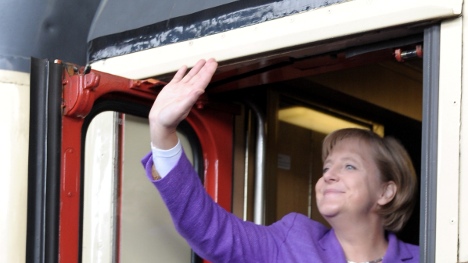 Merkel was accompanied by one of the daughters and six grand-children of former chancellor Konrad Adenauer, who led West Germany between 1949-1963, as the Rheingold Express rolled across 600 kilometres (370 miles).

The conservative leader described her ride in a glass-topped coach as “a trip towards the future of Germany” and “in memory of the roots” that shaped the country.

Adenauer was elected chancellor 60 years ago on September 15, 1949, and rode the same train across West Germany.

“I do not think that it is an adequate symbol. This nostalgia train does not represent the work of tomorrow,” he said.

Merkel, who grew up in East Germany, began her journey in Rhöndorf near Bonn where she layed a wreath on the tomb of Adenauer, who was also a leader of her Christian Democratic CDU party.

The train then headed to Frankfurt, Germany’s financial capital, where she warned against allowing a new economic crisis. She was to return to Berlin after stops in former East German cities.