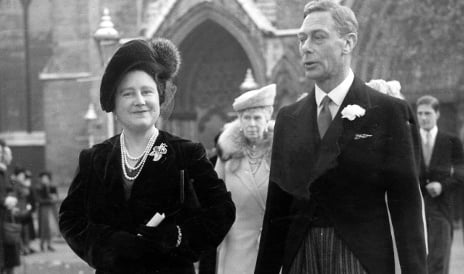 The Queen Mother with King George VI in the late 1940s. Photo: DPA

The letter, written to King George VI’s mother during the Second World War, was released ahead of the launch of the Queen Mother’s official biography, according to an article from the UK Press Association over the weekend. Hundreds of letters from the archives have been used by biographer William Shawcross, a friend of the royal family, in his research for the book.

In a full copy of the letter published by British daily newspaper The Independent, the Queen Mother describes the “horrible attack” by German planes and a later visit to the “dead city” of East London, devastated by bombing raids.

The Queen Mother describes going to fetch the King to move to a bomb shelter during one such bombing, but being delayed by his insistence that she help him remove an eyelash from his eye.

Before they had a chance to move, they heard the sound of a German plane ahead, the letter went on.

“We heard the unmistakable whirr – whirr of a German plane…Before anything else could be said, there was the noise of aircraft diving at great speed, and then the scream of a bomb,” she wrote.

After two explosions, the royal couple and two pages waited a moment before making their way down to the shelter. There, among others, the Queen Mother came across her French chef.

“When I asked him if he was alright, he replied cheerfully that there had been un petit quelque chose dans le coin (a little something in the corner), un petit bruit (a little noise)…he was perfectly unmoved, and took the opportunity to tell me of his unshakeable conviction that France will rise again,” she continued.

Later that day, around 1:30 pm, the King, whom his wife affectionately called “Bertie,” and the Queen travelled to East London.

“The damage there is ghastly. I really felt as if I was walking in a dead city, when we walked down a little empty street…At the end of the street is a school which was hit, and collapsed on top of 500 people waiting to be evacuated – about 20 are still under the ruins,” the Queen Mother wrote.

The attack on the palace itself left three workmen injured, the UK Press Association reported.

The Queen Mother, who reigned as Queen from 1936 until 1952, was known for her plucky spirit during the war resistance, refusing to leave the city of London during the Blitz.

In an interview conducted for new book’s publisher and posted on YouTube, biographer Shawcross said that his book about the Queen Mother, who died in 2002 at the age of 101, took six years to write.

“A lot of the research was done at Windsor Castle in the royal archives…It was a tremendous excitement and privilege to read all the letters, many of which were still unopened… Her letters are the core of the book, and it was a joy to transcribe them,” he said.