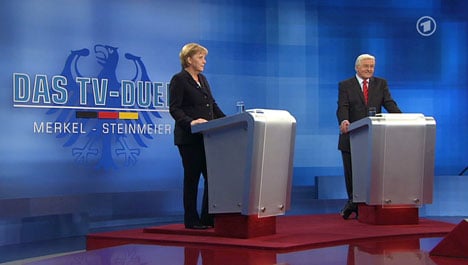 Trailing by a double-digit margin in the polls, Social Democrat (SPD) rival Frank-Walter Steinmeier needed a clear victory in Sunday’s debate but struggled to set himself apart from Merkel, his boss for the past four years.

Despite sparring on a national minimum wage and nuclear power, the debate devolved into a dry exchange of views, prompting one of the four moderators to complain at one point: “This is not a duel, this is a duet.”

While the owlish Steinmeier, who is also foreign minister, was snappier and tougher than usual, the dailies said he failed to deliver the soundbite that might be a game-changer before the September 27 poll.

“So who won? Frank-Walter Steinmeier was definitely better than his own supporters expected – a bit feistier, which a challenger has to be, but not polemical, more statesmanlike than aggressive, likeable,” the centre-left Süddeutsche Zeitung said. “But no, Sunday night will not be decisive for the election.”

A poll for ARD public television – one of four channels to broadcast the 90-minute debate dubbed as a “duel” with an expected one-third of the electorate watching – showed 43 percent of viewers thought Steinmeier had won versus 42 percent for Merkel.

But when asked who they would prefer to see as chancellor, 53 percent were for Merkel against just 38 percent for Steinmeier – albeit a narrower margin than before the debate.

The conservative Frankfurter Allgemeine Zeitung said Steinmeier had “surprised friend and foe” with a spirited performance.

But the centre-left Berliner Zeitung said Merkel had had far less to prove. “Merkel gave him no chance to sharpen his profile,” it said. “She only managed for a few moments to go on the attack. He was unable – and seems fundamentally unable – to muster the necessary brutality and ruthlessness when it comes to the last four years of governing together.”

One of the journalists posing questions described the candidates during the debate as “like an old married couple,” trying in vain to get them to lock horns.

Both praised the work of the left-right “grand coalition,” with Steinmeier saying: “We have achieved a lot together” and Merkel agreeing they had “worked well together.”

Political scientist Gerd Langguth of the University of Bonn said the nature of the loveless “grand coalition” kept the debate tepid.

“Merkel and Steinmeier actually just neutralised each other,” he told the Passauer Neue Presse, predicting that smaller opposition parties would be the real winners of the lacklustre “duel.”