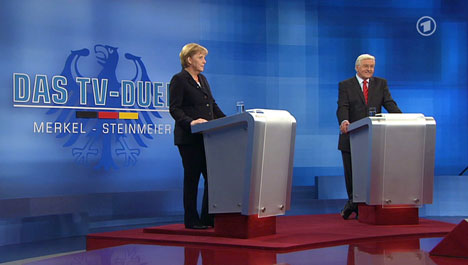 Trailing by a double-digit margin in the polls, Steinmeier from the centre-left Social Democrats (SPD) needed a clear victory and he attempted to differentiate himself from Merkel, who has been his conservative Christian Democratic (CDU) boss for the past four years.

“There is a better alternative, namely me,” he said early in the debate, which had been billed as a duel, but came across as more of a duet.

“You two are like an old married couple,” said one of the journalists asking the questions in a vain attempt to turn up the heat in the TV studio.

In fact, both candidates praised the work of the grand coalition that has been in power for the past four years, with Steinmeier saying, “we have achieved a lot together” and Merkel agreeing they had “worked well together.”

The televised debate was seen by many commentators as Steinmeier’s last chance to rescue his bid to become chancellor, with 20 million viewers expected to watch. And survey by public broadcaster ZDF immediately after the tepid duel showed Steinmeier eking out an advantage over Merkel with undecided voters.

However, another poll showed a majority of voters would still prefer to keep Merkel at the helm of Europe’s largest country.

Merkel and Steinmeier, her foreign minister and vice-chancellor, both tried to claim credit for the recent state-brokered rescue of automaker Opel and a drop in joblessness in the last four years.

But Merkel said she could return the country to prosperity after the impact of the global economic crisis hit hard last year if she could ditch the SPD for her partner of choice, the pro-business Free Democrats.

“We can continue decisively on this path but preferably with a new government,” she said at their only one-on-one debate of the campaign before the September 27 election.

Steinmeier, like Merkel dressed in a black business suit, said any economic recovery must be accompanied by better salaries for German workers. “We are faced with a downward spiral for pay,” he said, calling for a national minimum wage like that introduced in other major European economies. “Britain and France introduced them without a loss of jobs.”

In the context of Germany’s plan to mothball the country’s nuclear reactors by 2020, the two candidates also stressed their differences on atomic energy.

The chancellor said Sunday that the nuclear power plants should stay open as a “bridge technology until renewable, affordable energy makes a transition possible.” But Steinmeier called nuclear energy dangerous.

“That is the wrong way to go,” he said of Merkel’s plan. “We must maintain the phase-out of nuclear power.”

Despite occasional jousts, the debate quickly devolved into a tame policy discussion with a polite exchange of differing views.

Opposition parties immediately attacked the TV debate. Dietmar Bartsch from the hard-line socialist party The Left dismissed the duel as “a boring night … there was no real conflict.”

Political scientist Karl-Rudolf Korte told ZDF television that Steinmeier was surprisingly impressive during the debate – “more spontaneous, slightly fresher and spoke in shorter sentences that one might have expected.”

Polls before the debate showed more than half of people thought the TV debate would influence their vote on September 27, but the situation appeared to have changed in the immediate aftermath.

Only 14 percent said the debate would influence how they would vote, compared to 84 percent who said it would have no effect, according to a Forsa survey.