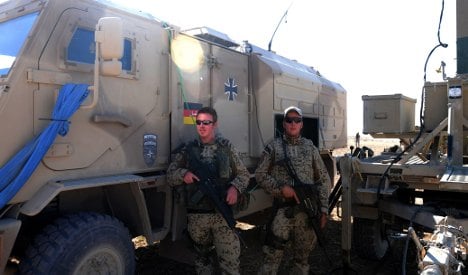 His ministry released the two-page paper with his permission, according to Der Spiegel magazine on Sunday, outlining the closure of the first army base by 2011 – to replaced by 1,500 new policemen in the Kunduz region.

“In the next legislature period it is about establishing the foundations for withdrawal from Afghanistan,” the paper says. “We have to set the course now.”

Steinmeier’s plan was released just hours before he was due to face Chancellor Angela Merkel in a televised debate on Sunday evening.

He is the chancellor candidate for the Social Democratic Union (SPD) for the national election on September 27, as well as Foreign Minister.

The release is likely to awake suspicions that he is looking for a quick political boost, particularly after it was confirmed that Sunday is the only time Merkel will take part in such a debate.

Steinmeier’s plan says that future reconstruction efforts would require “concrete, binding aims and at the same time effective precautions to monitor their implementation.”

The next conference on Afghanistan, which Merkel wants to schedule for later in the year, must come up with more specific decisions and no longer “be satisfied with vague targets,” the paper says.

The focus should be on building up the Afghan police force so that all 122 districts controlled by Germany in the north of the country have a sufficiently trained police force by 2011, the paper goes on.

In Kunduz, a particularly problematic area, this would mean a further 1,500 police officers.

The first step of the German withdrawal has not only been given a time limit, but also a location – the 500 German soldiers currently on duty in Faizabad will be sent home by 2011 and their base turned into a training centre for security forces and local administration.

Steinmeier’s former boss, ex-chancellor Gerhard Schröder, sparked discussion over a potential German withdrawal date early this month, receiving heavy criticism for saying that German troops should be home by 2015 at the latest.

Steinmeier himself rejected Schröder’s suggestion, saying he did not want to set a specific date for German withdrawal. He also said that Schröder’s time-frame was too short. Both Steinmeier and party leader Franz Müntefering said the idea of setting a date would be counterproductive on the ground.

But last week German operations in Afghanistan came under heavy international criticism after a German officer called in an airstrike on hijacked petrol tankers which may have resulted in the deaths of many civilians. NATO is currently investigating the incident.