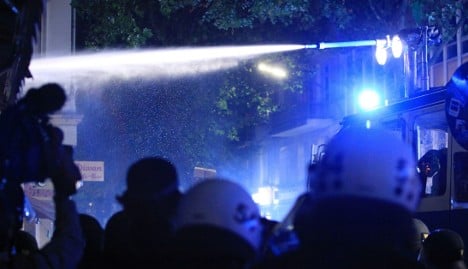 Police said a group of rioters broke several windows of a police station, prompting a street battle between what police spokesman Ralf Meyer said was around 200 young people and riot police.

The rioters threw stones at the police, set fire to car tyres in the street, demolished a bus stop and turned over a car, before splitting up and fleeing among the festival crowd.

When rioters began plundering an electrical goods store, police moved in with a water cannon.

The situation in the area was already tense after Friday night when around 60 people were arrested and 12 police officers injured in riots sparked by a neo-Nazi demonstration to protest Saturday’s street festival.

That street festival, in the famously left-wing and alternative area, had been arranged to call attention to what some residents argue was unwarranted force used by the police to break up violent demonstrations there in July.

A full tally of how many people were injured over the weekend in the northern city is not yet available.