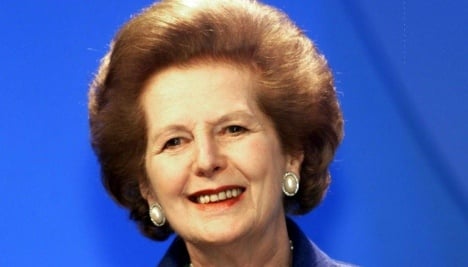 It has long been known that Helmut Kohl, who was chancellor of West Germany in 1989, had a problematic relationship with Thatcher at that time. In his memoirs, he recalled one incident in the run up to reunification in 1990 during a dinner at which Thatcher famously commented: “We’ve beaten the Germans twice already, and now they’re back!”

But the materials recently released by the Foreign & Commonwealth Office (FCO), along with papers from the British cabinet office, in a volume titled “German Unification 1989-1990” indicate the quite different attitude of several of her British colleagues, including her foreign secretary, Douglas Hurd, and the then British ambassador to Germany, Christopher Mallaby.

The website of German news magazine Der Spiegel reported this week that a document in the collection, written by Mallaby on November 9, 1989, for example, recalled Hurd declaring that reunification was “in our own interest.”

“The documents we have published tell the British side of the story, really for the first time,” Patrick Salmon, Chief Historian at the FCO told The Local.

“The British story had become rather dominated by the negative Margaret Thatcher view. There was an assumption that this was government policy, when in fact Britain had always been committed to German unity,” he added.

Whereas British diplomats were working behind the scenes to facilitate the peaceful transition of communist East Germany, they apparently were regularly perturbed by the Thatcher’s unhidden opposition to reunification with West Germany.

“The work of the diplomats was all very low key and doesn’t look very sexy next to Mrs. Thatcher’s occasional outbursts against the Germans,” Professor Salmon continued.

“There was a problem in the period between November 1989 and the Ottawa decision in February 1990, when British policy became paralysed because diplomats couldn’t convince Mrs Thatcher to say anything nice about the Germans. She found it emotionally very difficult to accept the whole process, but stuck with the decision for reunification once it had been made.”

The newly published material also makes reference to the reticence of then French President Francois Mitterand.

Der Spiegel reported one account of a lunch at the Elysee Palace, at which the French president warned Thatcher that reunification would give Germany more influence than Hitler’s state ever had and would mark a return of the “sinister Germans.”

“Mitterand was undoubtedly pretty negative about the whole process. Thatcher respected him intellectually, so found his historical explanations very persuasive. But neither of them actively did anything to stop the two plus four negotiations,” added Professor Salmon.

The FCO expressed satisfaction that the new material clears up previous misunderstandings about the British attitude in general at the time and adds to the historic understanding of events 20 years ago.

“I welcome the publication of the full story of Britain’s role in German unification, thanks to the work of the FCO’s historians,” said British Minister for Europe, Baroness Kinnock, in a statement.

“This collection is a tribute to the efforts of public servants and diplomats of all nations who helped to bring to a close the long years of division in Germany, and paved the way for the stability and security that we enjoy today in Europe.”

But discussion over Thatcher’s own approach to reunification is likely to continue, with British daily newspaper The Times reporting on a transcript of conversation between the prime minister and Soviet leader Mikhail Gorbachev showing the full degree to which she opposed the process.

Copies of official Kremlin records, photocopied and brought to Britain from files at Gorbachev’s personal foundation by journalist Pavel Storilov, document Thatcher’s conversations on the matter.

“We do not want a united Germany,” she said according to The Times.

“This would lead to a change to postwar borders, and we cannot allow that because such a development would undermine the stability of the whole international situation and could endanger our security,” she added.

“The substance of these documents is correct, but they are no huge revelation. These documents say the same as our volume. In fact, we published parts of them in our work,” said Professor Salmon of the material that appeared in The Times.