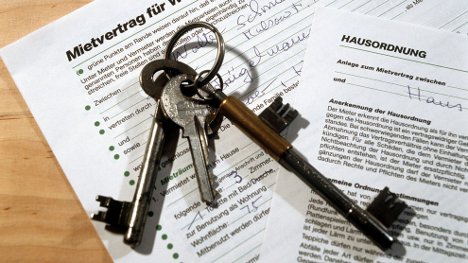 But the 2009 rental index by Hamburg real estate consultancy F+B showed rents are rising more slowly than in recent years. The average rent increase from the previous survey amounted to 0.6 percent per year for a 65-square metre property in a standard location. In 2008 the rise was of 0.8 percent, whereas in 1996 it was nearly four percent.

There were nevertheless important differences between regions. In eastern Germany and in North Rhine-Westphalia there was an average rise of 0.4 percent, while rents in northern Germany stagnated. But in the southern states of Baden-Württemberg and Bavaria, rents jumped 1.5 percent.

As to be expected, rents in southern Germany are by far higher than the rest of the country. Munich and its suburbs retains its top spot as the most expensive place to rent in Germany. Renters pay 71 percent more for their property in the Bavarian capital than the national average. Where as the national average rent costs €5.84 per square metre, Munich property costs on average €9.99 before heating and other expenses are factored in.

Wiesbaden, Stuttgart, Cologne and Düsseldorf follow, at around 20 to 30 percent above that average. In Hamburg, Frankfurt am Main and Mainz rents are about 15 percent higher.

In Berlin, on the other hand, rents are much cheaper: they are seven percent below the national average in the western part of the city and 12 percent lower in the formerly communist eastern half.

There is also a clear east-west split when it comes to different types of property renters prefer. While in the western regions the rents are higher for younger properties, in eastern Germany the older buildings are pricier than those built starting in the 1980s. Only those properties built after reunification in 1990 have clearly higher rents among modern structures.

The findings include 500 German municipalities from surveys of over 10,000 renters that have been collected since 1995.

The twenty most expensive places to rent in Germany: