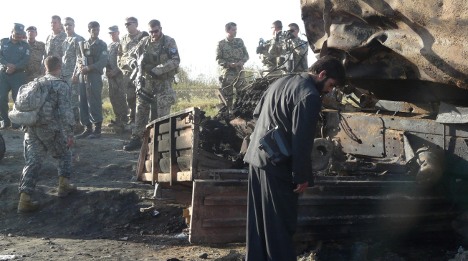 The Foreign Ministry told daily Financial Times Deutschland on Friday that German ambassadors had issued the demarches in NATO allied countries. The formal protests asked that officials wait until the NATO probe of the incident had concluded before commenting on the deadly bombing.

In Paris the protest was not well-received, the paper said.

“What should a minister say if such an attack kills 80 and there are civilians among them? Nothing?” an unnamed diplomat told the paper.

On Tuesday, German Chancellor Angela Merkel rejected “prejudgement” of the air strike in a speech to parliament.

Merkel assured the bombing of two fuel trucks in the northern part of the country last Friday would be thoroughly investigated amid concerns it caused scores of civilian casualties.

She lashed out at widespread criticism by many of Germany’s closes allies before NATO’s International Security Assistance Force (ISAF) completed its investigation of the incident.

“I won’t tolerate that either here at home or abroad,” she said.

The German government and military have faced immense pressure in recent days after Col. Georg Klein called in NATO air support to destroy two fuel tankers hijacked by the Taliban near the Afghan city of Kunduz. Berlin at first contended that only Islamist insurgents had been killed in the air strike, but ISAF announced shortly after Merkel’s speech that there had been an unspecified number of civilian victims.

French Foreign Minister Bernard Kouchner has described the strike as a “big mistake” while Afghan President Hamid Karzai blasted the German commander’s call in an interview with French daily Le Figaro: “What an error of judgement!”