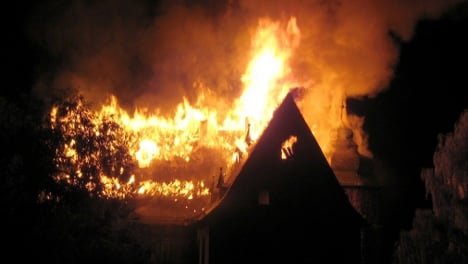 “At this time the cause of the fire is still unclear,” police spokesman Heiko Sauer told journalists.

Local residents first reported seeing flames in the building at 4:30 am. When police arrived at the scene, the roof was already totally engulfed in flames.

Click here for more photos of the Ebelsbach fire.

“Volunteer fire fighter units from the surrounding area were joined by a private fire brigade from a large firm in Schweinfurt in trying to extinguish the blaze,” police reported. Emergency medical services, police and the Federal Agency for Technical Relief (THW) were also on hand.

The fire crew attempted to douse the fire from several angles, but had limited success, media reports said. As the fire continued, people from the village came out onto the streets to watch. Among them were Ebelsbach Mayor Walter Ziegler, and district administrator Rudolf Handwerker, who were at the scene early in the morning.

The fire was extinguished later in the morning without injuries or nearby buildings catching alight.

The moated castle was built in the sixteenth century by Baron von Rotehan, which is the small town’s main landmark. The renaissance building, which includes a garden and several outbuildings, is owned by a businessman from Cologne. Police estimated the damages to be several million euros.