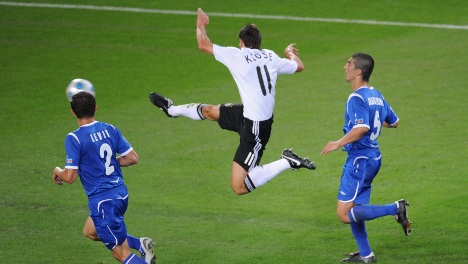 The 31-year-old Bayern Munich star has now scored 47 goals for his country to put him joint third amongst Germany’s goal-scorers and level with legends Jürgen Klinsmann and Rudi Völler.

But he still has some ground to cover to break Gerd Muller’s record of 68 goals to be crowned Germany’s goal king.

“We still have a good team to face in Russia next month,” said Klose ahead of Germany’s penultimate World Cup qualifier in Moscow on October 10. “Football is a team sport, it is not about individuals. But the coach of the national team now knows that I am nearly at 100 percent.”

After the national team’s rising stars Mario Gomez and Mesut Özil scored in last Saturday’s 2-0 win over South Africa, the old guard had their say here as captain Michael Ballack, Klose and Lukas Podolski scored for the hosts.

With Russia winning 3-1 against Wales in Cardiff, Germany lead Group Four by a point from their Russian rivals, but this was not a commanding performance against the side bottom of the group.

“We have done what we set out to do, now it will go down to the wire,” said Chelsea star Ballack. “The game in Russia will be the most difficult of the whole qualification campaign. We began well, but after the goal we inexplicably lost our way. We were chasing the game which was quite poor and unusual for us, but we did ok in the second-half.”

Goalkeeper Robert Enke had already been forced out by a mysterious illness at the start of the week so Bayer Leverkusen’s Rene Adler, who kept another cleansheet after Saturday’s South African win, stayed between the posts.

Having employed a 4-3-3 system to great effect last Saturday, Löw opted for the same formation with Podolski and Özil on the flanks with Gomez as the single striker.

The best chance of the opening stages fell to Werder Bremen’s Özil when the 20-year-old broke through but fired his shot at goalkeeper Kamran Aghayev.

Then on nine minutes, Bayern Munich’s Bastian Schweinsteiger cut in from the wing and attempted a long-range shot that flew over the bar.

It was only a matter of time before Germany got the first goal and it came soon after when Bayern’s Gomez threaded a pass through the defence for Cologne’s Podolski.

He was brought down by the Azerbaijan defence and Ballack slotted home the spot kick on 13 minutes.

But the home side lost their way with 30 minutes played as Özil, then Ballack gave away posession needlessly with the guests posing no danger.

In the lull, Azerbaijan took advantage when Mahir Shukurov drilled in a shot which demanded a strong save from Adler on 37 minutes, it was more than the home crowd could stomach and the Germans walked off to loud boos at half-time.

Löw made a change immediately after the break with Klose – the top scorer at the 2006 World Cup – replacing Gomez as the lone striker.

The move paid off as Klose hit his 46th goal for Germany on 55 minutes after Azerbaijan had their captain Samir Abbasov sent off five minutes before for a second yellow card offence.

Klose scored his second on 66 minutes before Podolski slotted home his shot on 71 minutes as Germany re-exerted their authority. Klose netted again in the 73rd minute, but his effort was ruled offside and his hat-trick was denied.

But Germany will need to raise their game over the full 90 minutes to be sure of victory in Moscow.