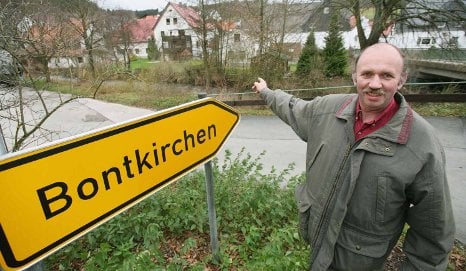 Stormbruch is just a stone’s throw away from Bontkirchen, which was assigned to North Rhine-Westphalia after WWII, though it continues to be the spiritual home of many Stormbruch residents. The separation, marked by a stream called the Itter, has engendered countless problems for residents caught between two administrative systems.

Bureaucratic difficulties have plagued the daily lives of the 22 residents in the tiny enclave. For Marion Votland and her husband, a special permit was needed to allow their children to attend school in neighbouring Bontkirchen, her hometown, despite the nearest Hesse school being miles away with no bus transport.

“I am happy that all this bureaucracy is coming to an end soon,” she told news agency DDP.

“Even postal delivery is a disaster. Letters are not delivered because the postal service assigns us to North Rhine-Westphalia, but our address officially belongs to Hesse,” added local sawmill owner and carpenter Ernst Hennecke.

But life on the border will likely end on Wednesday, when the North Rhine-Westphalia parliament is expected to approve a treaty taking Stormbruch into the state. This comes after the Hesse parliament spoke out in favour of a border change in July this year.

According to Volker Becker, mayor of Diemelsee, the administrative region to which Stormbruch currently belongs, there has been cross-border agreement on the matter for over three years now.

“They’re always talking about a unified Europe, but here even this small area has been divided. The people from Bontkirchen, now living in Stormbruch, bear no social resemblance at all to the people of Diemelsee,” he said.

The question as to why it has taken so long for the parliaments to reach a decision remains unanswered. Even the outline for the treaty itself acknowledged that the campaigns had been taking place “since the end of the 1950s.”

“If the parliament in North Rhine-Westphalia approves the treaty on its second hearing, it will come into effect around October 1,” confirmed Heike Dederer, a spokesperson for the Hesse parliament.

While the end may be in sight, it won’t come cheaply. North Rhine-Westphalia will have to pay Hesse €390,000 for the privilege of gaining 22 extra residents – the price the other state has exacted for the loss in tax revenue.