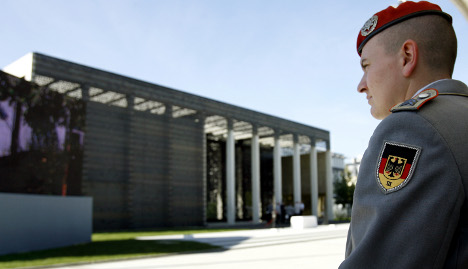 “We are aware that in the past the death of soldiers has often been used for propaganda, especially in Germany,” said President Horst Köhler, alluding to the Nazi past, during a ceremony in Berlin on Tuesday evening.

The monument located in the center of the German defence ministry, near the place where the head of a failed plot against Hitler was executed in 1944, is not there to glorify any war, Köhler said. “It is a place for mourning,” he said.

The inscription on the monument reads: “In memory of the dead of the Bundeswehr (armed forces). For peace, justice and freedom.”

It is the first memorial dedicated to German soldiers and civilian workers killed during combat, attacks or military accidents and exercises, since the founding of the Bundeswehr in 1955.

The German armed forces are currently at the centre of a fierce national debate over its role in the NATO-led operation against Taliban insurgents in Afghanistan after a German commander ordered an air strike in which civilians were killed.

Chancellor Angela Merkel addressed the issue in a statement to parliament Tuesday, saying she regretted any innocent lives lost in the strike but defended Germany’s military involvement in Afghanistan, which she described as a breeding ground for terrorism.

The hard-line socialist party The Left, which has called for Germany to leave NATO and Afghanistan, has criticised the new memorial to war dead. The memorial “shows that a new warlike mentality is taking root in Germany,” The Left parliamentarian Inge Hoeger said.