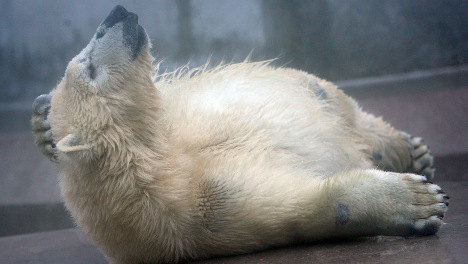 “The polar bears are relaxing behind the scenes right now,” bear keeper Heiner Klös told news agency DDP, adding that they will make their public debut in the coming weeks.

Three-year-old Gianna, who originally came to Germany from Italy, will initially be separated by a fence from her intended mate. If the two Arctic omnivores take a liking to one another, zookeepers hope they will mate upon reaching sexual maturity in another two years.

But Gianna, named after Italian rock singer Gianna Nannini, has a history of romantic antagonism – she spurned her last intended mate, 12-year-old Yoghi, and had to move in with Knut’s grandmother Lisa (32) at the Hellabrunn Zoo.

Yoghi and Lisa happen to be the two other bears from the Munich facility that will stay in Berlin’s eastern Tierpark– not to be confused with Knut’s home, the Berlin Zoo in the west of the city.

The bears have come to Berlin temporarily due to renovation work at their Munich facility.

So far Knut, who was hand-raised after he and his brother were abandoned by their mother at birth, has had no contact with other polar bears.

He was the first polar bear to be born and mature in the Berlin Zoo in more than 30 years. His brother died shortly after birth, but little Knut survived and was raised by the late zookeeper Thomas Dörflein. The cuddly bear became a worldwide sensation, spawning countless souvenirs, stuffed toys, books and even an animated film.