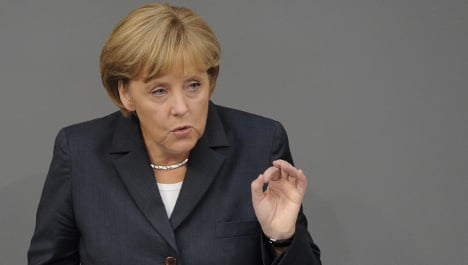 In a speech to parliament, Merkel assured the bombing of two fuel trucks in the northern part of the country on Friday would be thoroughly investigated amid concerns it caused scores of civilian casualties.

“Each innocent loss of life in Afghanistan is one too many,” she said. “Any innocent person killed or hurt, including through German actions, I deeply regret.”

But Merkel lashed out at widespread criticism and “prejudgement” of the Bundeswehr decision to call the air strike by many of Germany’s closes allies before NATO’s International Security Assistance Force (ISAF) completed its investigation of the incident.

“I won’t tolerate that either here at home or abroad,” she said.

The German government and military have faced immense pressure in recent days after Col. Georg Klein called in NATO air support on Friday to destroy two fuel tankers hijacked by the Taliban near the Afghan city of Kunduz. Berlin at first contended that only Islamist insurgents had been killed in the air strike, but ISAF announced shortly after Merkel’s speech that there had been an unspecified number of civilian victims.

Germany only began major military deployments abroad a decade ago, breaking a postwar taboo, and the air strike has moved what was already an unpopular mission up the agenda ahead of general elections in less than three weeks.

In her address, Merkel also delivered a stout defence of Germany’s presence in Afghanistan, which had proved deeply unpopular among Germans even before Friday’s raid.

“It was Afghanistan, controlled by the Taliban and al-Qaida, that was the breeding ground for the terror of September 11,” Merkel told lawmakers on Tuesday, referring to the 2001 attacks on the United States.

“The September 11 attacks were followed by dreadful attacks in Europe – in Madrid and in London. We know too that Germany is in their sights … The engagement in Afghanistan is our reaction to terror. That’s where it came from. Not the other way around.”

Frank-Walter Steinmeier, foreign minister and Merkel’s challenger in the September 27 election, also slammed international criticism of the air strike, saying people should wait for all the facts to be established.

“I understand that discussions are taking place not only here but also in other countries, both in Europe and outside Europe,” Steinmeier told parliament before calling on Berlin’s allies to reserve judgement until the investigation of the incident was complete.

French Foreign Minister Bernard Kouchner has described the strike as a “big mistake” while Afghan President Hamid Karzai blasted the German commander’s call in an interview with French daily Le Figaro: “What an error of judgement!”

Merkel has refused to name a date for a withdrawal of its 4,200 troops, but on Sunday she unveiled a joint German-British-French proposal for an international conference this year to pressure Karzai’s government to take on more responsibilities.

Both Merkel’s conservative Christian Democrats and Steinmeier’s centre-left Social Democrats support Germany’s military engagement in Afghanistan, as do the opposition Free Democrats and Greens. Only the hard-line socialist party The Left demands the immediate withdrawal of German forces.