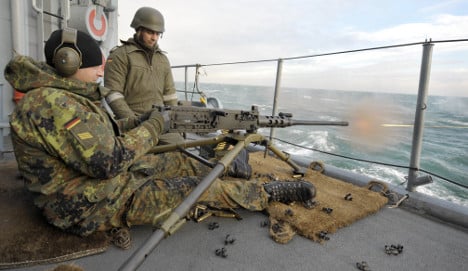 “After an exchange of fire, one of the men on the boat was critically wounded and died despite immediate medical treatment,” a statement said.

The suspected pirates threw weapons overboard after the exchange and officials are now inspecting their boat, the statement added.

The German frigate involved – the Brandenburg – was participating in the European Union’s Atalanta mission in the lawless Gulf of Aden waters off Somalia. The mission aims to curb attacks by pirates threatening one of the world’s busiest maritime trade routes.

More than 130 merchant ships were attacked last year, a rise of more than 200 percent on 2007, according to the Kuala Lumpur-based International Maritime Bureau’s Piracy Reporting Centre.

The death comes as the German defence ministry is embroiled in an ongoing NATO investigation of a Bundeswehr-directed air strike in Afghanistan that may have killed scores of civilians.